A new report released Wednesday that Walmart is dodging taxes by stashing $76 billion of profits outside of the country using 78 subsidiaries in 15 tax havens raises a question: Why is Congress and the White House considering policies that reward tax dodgers like this?

You may have heard that Walmart pays its workforce so little that they qualify for government assistance like food stamps and Medicaid. That costs taxpayers billions (and raising their minimum pay to only $9 per hour isn't going to change that very much).

You may have heard that the Walmart heirs have more wealth than 42 percent of Americans combined. That was a 2012 figure - it has only gotten worse since.

You may have heard that the Walmart heirs helped finance an effort to cut estate taxes in 2006. That cost taxpayers billions.

Now we hear that Walmart and the Walton hairs are not only getting billions in tax subsidies like these – they also dodge paying taxes on their profits.

The report by Americans for Tax Fairness found Walmart uses 78 previously undisclosed subsidiaries and branches in 15 offshore tax havens to offshore $76 billion in profits. This results in 90 percent of WalMart’s overseas assets being owned by subsidiaries in Luxembourg and the Netherlands, two of the most popular corporate tax havens. These 78 undisclosed overseas subsidiaries in tax havens have no retail operations and few, if any, employees.

Walmart does not list these subsidiaries in its annual 10-K filings with the U.S. Securities and Exchange Commission (SEC).

The report is named "The Walmart Web: How the World’s Biggest Corporation Secretly Uses Tax Havens to Dodge Taxes," and is available here. You can read the report’s key findings here. 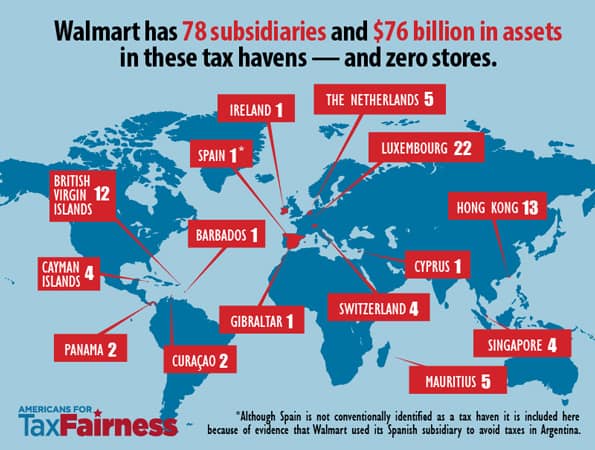 Wal-Mart employs a popular legal strategy in that country called a hybrid loan. It permits companies’ offshore units to take tax deductions for interest paid – typically on paper only – to their parents in the U.S. The parent, however, doesn’t include that interest as taxable income in the U.S.

Who pays when companies like Walmart are able to dodge taxes by pretending their profits are made elsewhere and keeping the cash outside of the country? A report by the Public Interest Research Group (PIRG) shows how small businesses get slammed to make up for these corporate tax havens. The PIRG report, "Picking Up the Tab 2015," showed that every American small business would have to pay an average of $3,200 in additional taxes to make up for all the lost revenue due to corporations exploiting tax havens. A state-by-state breakdown from the U.S. PIRG report shows how much small businesses would owe on average and cumulatively in each state.

Another way we pay is through cuts in the things government does to make our lives better. Infrastructure, schools, research, etc. all suffer as Congress declares we need to engage in austerity because we are not collecting enough tax revenue to "pay for" things that drastically need to be done.

Corporate profits are supposed to be taxed at a 35 percent rate. But President Obama has proposed a "repatriation tax holiday" allowing these companies to bring back offshored profits and pay only a 14 percent tax rate. Republicans in Congress are proposing just letting them off with no taxes.

Meanwhile U.S.-based companies that do not engage in these profit-offshoring-to-tax-havens schemes have to pay the full rate. Obviously rewarding companies that hide profits on offshore tax haven by giving yet another tax "holiday" would encourage other companies to start offshoring their profits as well. Then they can just wait for the next "holiday."

A better solution is to end this "deferral" of foreign-made profits and have companies just pay their taxes.