The 19 Democrats in the TPP Hall of Shame 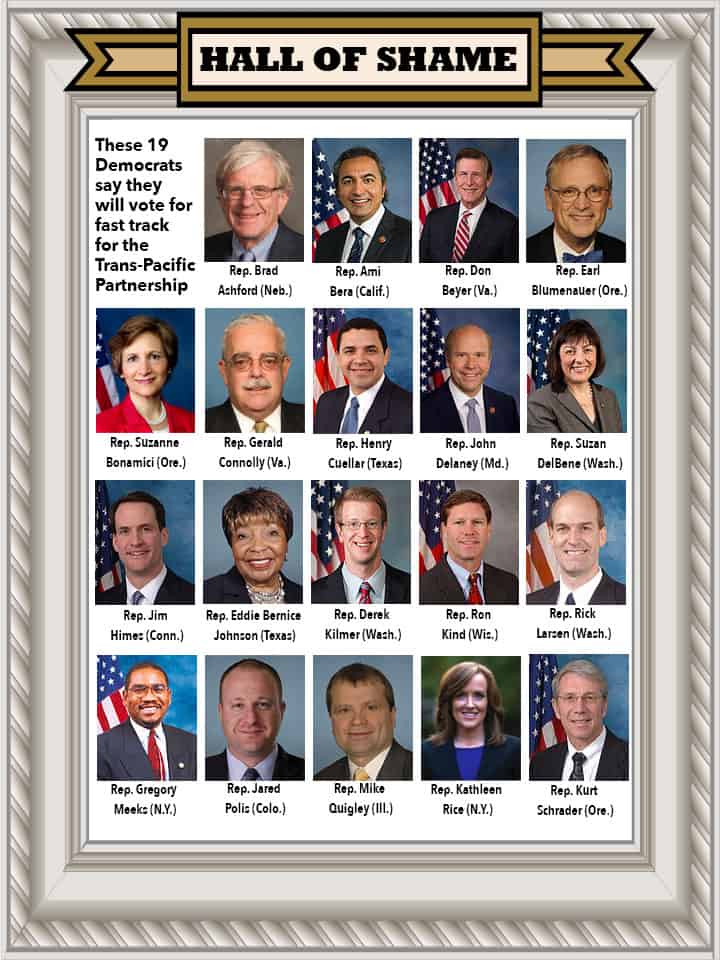 The battle over fast-track trade authority for the Trans-Pacific Partnership is coming down the home stretch. It's not clear as of this writing when the House vote will be, but the expectation is that House Republican leaders will call a vote as soon as they believe they have at least the 218 votes needed to pass the measure.

It seems as if vote tallies are being updated hourly. A whip list published by The Hill had as of Tuesday afternoon 129 supporting fast track and 159 against. Nineteen Democrats have joined 110 Republicans in support for the bill, while 30 Republicans have joined 129 Democrats against it. There are 145 minds to sway, with 41 Democrats and 106 Republicans publicly undecided on the bill.

Trade promotion authority would give the president the sole negotiating power for the Trans-Pacific Partnership (TPP), and would only allow Congress an up-or-down vote on a trade deal that could affect nearly 40 percent of the world’s population. This is a trade deal that, with the exception of a few leaks, we know little about.

The issue has created a strange new world for many on both sides of the aisle. Congressional Progressive Caucus Co-Chairs Reps. Raul Grijalva and Keith Ellison are joined by Tea Party stalwarts Reps. David Brat of former minority leader Eric Cantor’s Virginia district, and Steve King of Iowa. It is truly bizarro world out there. Due to the Republican defections, the majority must corral enough Democratic votes to get the bill across the finish line.

That's where you come in. According to the Hill article on the state of play of the TPP, there could be as many as 25 Democrats lined up to support the bill, which means fast-track opponents are going to be playing defense on keeping the "no" votes in that column and the undecideds from becoming "yes" votes.

For evidence that these calls can really have an effect on Congress, look no further than New Orleans’ Rep. Cedric Richmond (D-La.) who said that all the calls he has received have been to vote against TPP, the only call asking him to support it was from President Obama. Because of the calls from his constituents, he is currently "leaning heavily no.”

Call your representative, tell them to vote NO on Fast Track.

We have placed the 19 Democrats who have registered their support fast track into the "Trans-Pacific Partnership Hall of Shame" for supporting legislation that would cost American jobs; put Americans' health, safety and environment at risk; and would expand corporate power at the expense of the public interest.