As of this week, the race for the GOP presidential nomination has eight official candidates, and no front-runner. But it has plenty of gaffes, and promises more to come.

The Republican field grew by two more candidates this week, as former senator Rick Santorum and former New York governor George Pataki squeezed into the GOP’s presidential primary “clown car.” With more candidates expected to announce in the coming weeks, the field is only going to get more crowded, which is only going to make the upcoming debates trickier.

Fox News is handling the GOP debates. That’s bad enough, considering that so far the toughest questions the candidates have faced came from Fox News anchors. Fox has limited participation in the first debate — on August 6 — to the top 10 candidates. By then the GOP field may have swollen to at least 16 candidates, as more wannabes stop flirting with the idea of running, and make it official.

That raises a question: Just what kind of debate format could possibly accommodate 16 (or more) candidates? The most likely to work is probably a game show format, but even a Hollywood Squares format would only accommodate nine candidates. That’s one less than Fox’s cut-off point. So, maybe a “reality television” format is a safer bet. Maybe the RNC and Fox should consider borrowing ideas from “American Idol” or “America’s Next Top Model”? 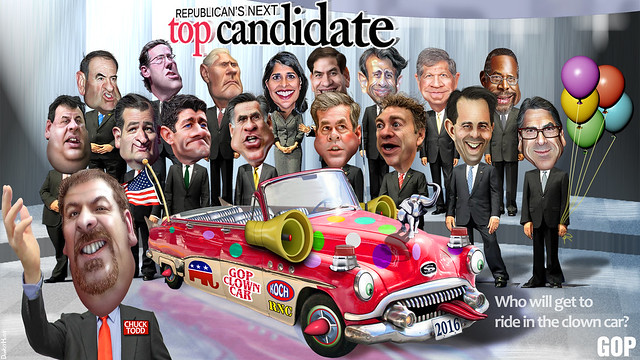 The next big problem will be finding ten legitimate front-runners, in a primary race that doesn’t have any. According to a recent Quinnipiac University poll, there are currently five leaders in the race for the Republican presidential nomination — Former Florida Governor Jeb Bush, former Arkansas Governor Mike Huckabee, Senator Marco Rubio (R-FL), Wisconsin Governor Scott Walker and Dr. Ben Carson — but they’re all polling at just 10 percent each.

The only real front-runner is “Undecided,” polling at 20 percent. That’s kind of a problem, unless Fox decides to have the other candidates debate an empty chair. Then again, maybe not, considering how well that turned out the last time.

It’s no wonder “Undecided,” is the only front-runner in the GOP race. Considering how the actual candidates are embarrassing themselves thus far.

Writer and LGBT activist Dan Savage wants to do for Josh Duggar what he did for Rick Santorum. Savage called on his Twitter followers to help him coin a new term based on the “19 Kids and Counting” star, who was investigated for molesting under age girls, including some of his sisters, as a teenager.

Savage’s fans did not disappoint.

@fakedansavage the frothy mix of sanctimony and sexual hypocrisy

@fakedansavage the delusion of sexual/moral invincibility as a result of celebrity status and/or cult involvement.

Here’s the best of the rest of the worst in wingnuttery this week: