The Trans-Pacific Partnership And The Costs of Drug Patent Monopolies

The debate over the Trans-Pacific Partnership (TPP) has taken center stage in policy circles in recent weeks. Its proponents promise a major economic bonanza from expanded trade. It's not clear that the economics supports this claim.

The United States Department of Agriculture (USDA) did an analysis of the gains from the reductions in tariffs and quotas that are expected to be included in the agreement and concluded that they would be too small to measure, rounding to zero. A study by Peter A. Petri and Michael G. Plummer, using a somewhat different methodology, concluded that when the TPP is fully implemented, roughly ten years after the agreement is put in effect, the gains to the United States would be 0.38 percent. This is roughly two months of normal growth.

Neither of these analyses tried to calculate any losses from the increased protectionism in the TPP associated with stronger and longer patent and copyright protections. These protections will raise the price of the protected items far above the free market price. This can impose substantial economic costs.

To take the case of one drug that has been in the news recently, the hepatitis C drug Sovaldi sell for $84,000 for a three month course of treatment. A high quality generic version is available in India for less than $1,000. Since there are 3 million people in the United States suffering from hepatitis C, the implied savings from buying the drug at the generic price rather than the patent protected price would be almost $250 billion.

While Sovaldi is extraordinary in presenting a major breakthrough in the treatment of a relatively common disease, it shows the potential costs of extending patent protection. This is also the cost from just one drug when stronger and longer patent and copyright protections will apply to wide range of drugs and other items.

The figure below compares the cumulative 10-year gains projected from the TPP from the USDA analysis, the Petri and Plummer analysis and the costs of having to pay the patent protected price for Sovaldi to treat people in the United States suffering from hepatitis C. 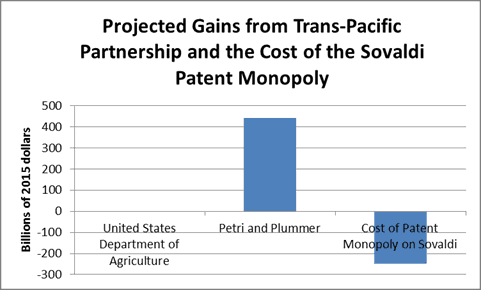 It can be argued that the increased profits from stronger patent and copyright protections will lead to more innovative and creative work. This may be true, but it will also lead to abuses as companies will have more incentive to engage in rent-seeking behavior. In the case of prescription drugs this can be extremely costly since it can mean deceiving the public about the safety and effectiveness of their drugs.