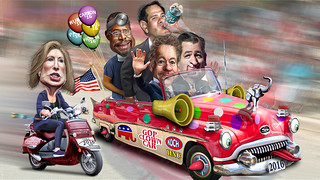 The GOP’s “clown car” primary season has begun, and already the downside of having such a long primary campaign is starting to show. The candidates have plenty of time to contradict and embarrass themselves. And are they ever.

Here’s a look at how their campaigns are fairing.

Former Florida governor Jeb Bush stumbled into the 2016 presidential race, when he inadvertently announced his candidacy while speaking with reporters in Reno, Nevada. It wasn’t his first stumble of the week.

“I am my own man,” Jeb Bush said, as he assured voters that he was not his brother or his father.

So why did he turn around this week and tell Fox News host Megyn Kelly, the he would have invaded Iraq just like his brother did?

That’s the kind of thing that can doom a presidential bid. The Iraq war is one of the most unpopular wars in U.S. history, perhaps second only to the war with Afghanistan. More than half of Americans — 53 percent — believe it was a mistake. If so, it was an expensive mistake. By some estimates, the Iraq war has cost us $1.7 trillion thus far, add benefits to veterans and it could cost up to $6 trillion within 40 years.

Yet, Jeb Bush just told Americans he’d do it all again. So much for Jeb being “the smart one.” He might as well have said that a vote for him is a vote for a third “Dubya” term. Bush later tried to walk back his answer, claiming that he either “misheard” or “misinterpreted” the question.

Neither sounds very likely, but one thing is certain: He regrets his answer. He certainly regretted it when a University of Nevada student confronted him, saying, “Your brother created ISIS.”

UPDATE: Apparently, Bush regretted his answer so much that he decided to change it. CNN reports that Bush has "clarified" his position — again.

The war in Iraq -- the issue that defined George W. Bush's presidency and haunted candidates from both parties on the 2008 campaign trail -- is back.

And this time it's creating headaches for Jeb Bush.

In his clearest declaration yet on his feelings about his brother's invasion of Iraq, the former Florida governor said Thursday that "knowing what we know now, ...I would not have engaged."

"I would not have gone into Iraq," he said.

If there were any justice, this would be the week that Ben Carson disqualified himself and dropped out of the race in shame. Unfortunately, a guy who uses terms like “women’s lib” (still?!) and “judicial law” is probably incapable of embarrassment. This week, Carson cited the Dred Scott decision to assert that the president doesn’t have to abide any Supreme Court rulings — like the one the Court is expected to announce in favor of marriage equality sometime this summer — revealing how little he understands about the constitution or how our branches of government work.

What should have been even more embarrassing for Carson was his meeting with city leaders in Baltimore, to address the roots of last month’s unrest following the death of Freddie Gray. It should have been an easy event for Carson. But after Carson went on for an hour, tossing off vague accusations against “purveyors of division” and “secular progressives,” the meeting turned into a baptism by fire when someone broached the one subject Carson seemed unable or unwilling to address.

What he had not yet broached was a raw and treacherous topic that even the current Democratic president has struggled to cope with.

So J. Wyndal Gordon, a trial attorney representing some of the young protesters arrested after demonstrations against police tactics turned to riots, forced him to.

“When do you think it is appropriate to discuss race?” he asked.

When Carson attempted to “turn that question around and ask you,” Gordon demurred, interjecting, “If you could answer my question.”

Clinton came out in support of marriage equality in 2013, two years after her historic UN speech in recognition of International Human Rights Day, in which she unequivocally stated, “Gay rights are human rights, and human rights are gay rights.” Most recently, Clinton called on the Court to strike down same-sex marriage bans, and legalize marriage equality for the whole country. Looks like Fiorina has some catching up to do, yet.

Unfortunately, Fiorina still has to outrun her past. She kicked off her campaign by citing her background as CEO of HP, and saying, “I understand how the economy actually works. I understand the world, who’s in it, how the world works.” But this week, reports surfaced that Fiorina took four years to pay staffers from her failed 2010 senate campaign. Fiorina, whose personal wealth is estimated at $120 million, ponied up $487 of her own money, and finally made good on the overdue pay just two months before she announced her presidential campaign.

Does that sound like someone who’s “fiscally responsible,” and understands “how the economy works”? Or does it sound like a CEO who ran her company aground, laid-off 30,000 people, still walked away with a $20 million severance package, and understands that the world works very differently for people like her?

The biggest news out of Sen. Rand Paul’s campaign isn’t about the candidate. This week, Paul was overshadowed by the antics of staffer David Chesley, who will forever be known as “the Rand Paul Tongue Guy.”

Chesley noticed a tracker at a New Hampshire town hall event. Trackers go to events for opposing candidates, and film everything they say, in hopes of catching them saying something embarrassing or controversial. Annoyed supporters usually try to block trackers’ cameras. Everybody does it.

David Chesley went about it all together differently. Video of the incident shows Chesley walking in front of the camera, then backing up and making eye contact with the tracker. Chesley then appears to be considering some sort of action. Then he decides to go for it, and licks the camera lens. You read that right. He licked the camera.

Primary season has only just started, and even more GOP candidates are likely to enter the race, but things are already getting weird.