The U.S. Census Bureau reported Tuesday that the March goods and services trade deficit was $51.4 billion. This was an increase of $15.5 billion, or 43.1 percent, from the revised figure of $35.9 billion in February.

The U.S. goods deficit with Japan increased in March to $6.3 billion, up from $4.3 billion in February.

The U.S. goods trade deficit with Korea has more than doubled in the full first three years since the U.S.-Korea free trade agreement (FTA) went into effect. In those three years U.S. goods exports to Korea have dropped 6 percent, or $2.7 billion, while goods imports from Korea have surged 19 percent, or $11.3 billion compared to the year before implementation.

Some of the 43 percent jump in the trade deficit between February and March was likely due to the end of the West Coast port strike. Ships full of imports were waiting to be unloaded. However, this only accounts for some of the increase. The trade deficit would have gone up without that. (Note that the March 2015 trade deficit is 17 percent higher than the monthly deficit was in March 2014.) According to BloombergBusiness, in "Trade Gap in U.S. Swells to Six-Year High as Imports Surge,"

“The ending of the port strike seemed to really only have a material effect on imports, not on exports,” said Michael Feroli, chief U.S. economist at JP Morgan Securities LLC in New York and the second-best forecaster of the trade balance over the past two years, according to data compiled by Bloomberg. “When we smooth through the data, it looks like the trend in imports is moving higher whereas the trend in exports looks kind of soft.”

A strong dollar is good for Wall Street, bad for the trade deficit, American jobs, American-based businesses and 99 percent of Americans. But it has reached the point where it is hurting the profits of some major U.S. multinational corporations. This chart from Forbes, "Strong Dollar Haunting Huge Companies From P&G To McDonald's," tells the story: 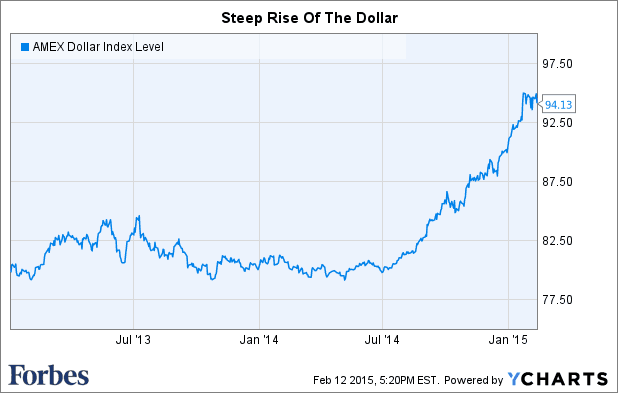 The mighty greenback has been a common theme in earnings reports from behemoths that make a large chunk of their money outside the country. Why? A stronger dollar means sales abroad translate into fewer dollars back home, a reality that is making its way into many corporate forecasts after the dollar rose 6% against other major currencies in the fourth quarter and has climbed another 3% in 2015.

Calculated Risk explains that this deficit is not driven by oil imports, as in the past, which means the impact of goods and services imports on jobs is even worse,

Oil imports averaged $46.47 in March, down from $49.53 in February, and down from $93.91 in March 2014. The petroleum deficit has generally been declining and is the major reason the overall deficit has declined since early 2012. 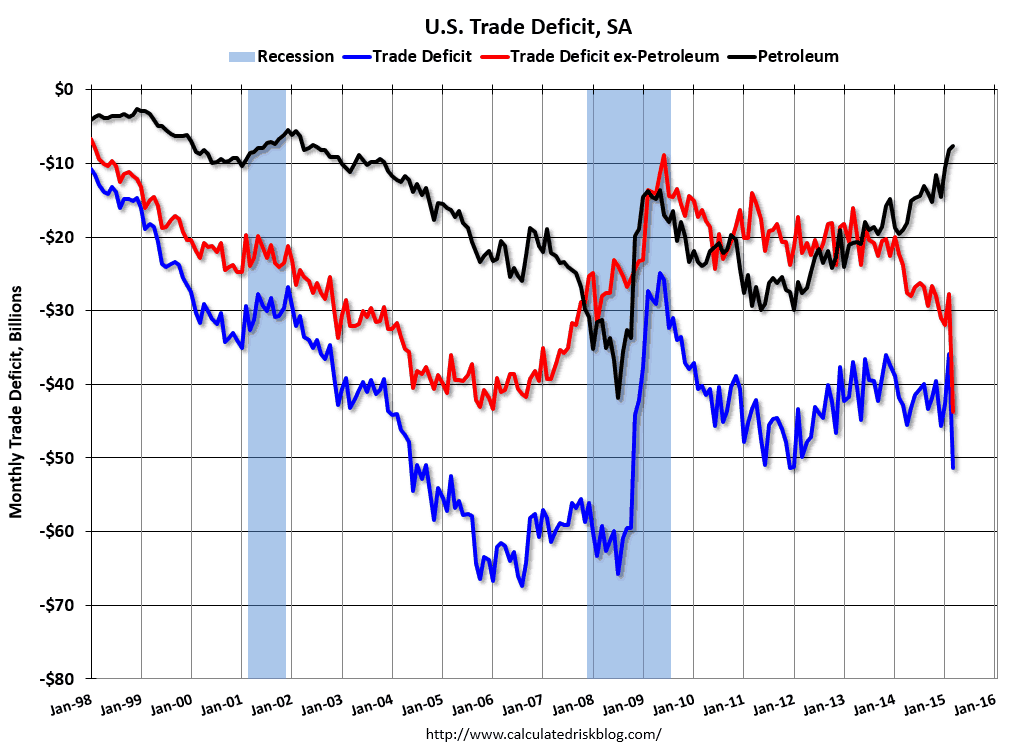 Finally, America's "free trade" policies since the late 1970s account for most of this deficit.

Our Economy Is Creating Jobs – But Not Here

The March trade numbers show there is increased demand in our economy, enough to create a lot of jobs and make businesses a lot of money. And that is exactly what we did in March. But thanks to our trade policies we created them somewhere else because we import more than we export.

The United States has not had balanced trade for even one single year since the late 1970s. This chart is from last week's post, "Trade Deficit = Slower Economy = Fewer Jobs = Baltimore." 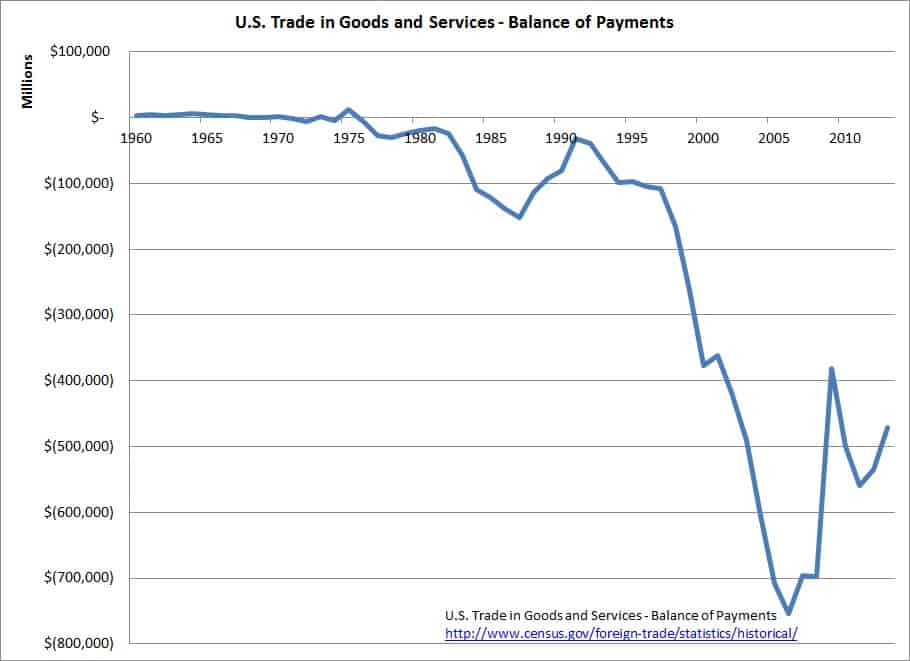 If you make things and sell them, you do better over time than if you borrow to buy things. If you send jobs and factories out of the country, you end up with devastated cities like Baltimore. Sure, a few people get rich from that, but 99 percent of us get poorer. How hard is it to see that?

This didn't just suddenly happen. Globalization is not some kind of inevitable natural process of history that has caught up with us. This was and is the result of intentional policy choices, designed to force deindustrialization, break unions, drive down wages and benefits and increase inequality as that pay differential is pocketed by a few. This is the result of the "free market, free trade" ideology that rose up in the late 70s. Free trade policy was and is designed to give a few plutocrats and their giant corporations -- "the 1 percent" -- increased power over governments.

Dean Baker, in "Globalization Was Policy, Not Something That Happened," explained, "... inequality, like the path of globalization, is not something that happened. It was and is the result of conscious policy. We won't be able to deal with it effectively until we acknowledge this simple fact."

Where did the money go when we deindustrialized? This chart is from 2013's "How Wall Street Devoured Corporate America," by Jordan Weissman in the Atlantic, 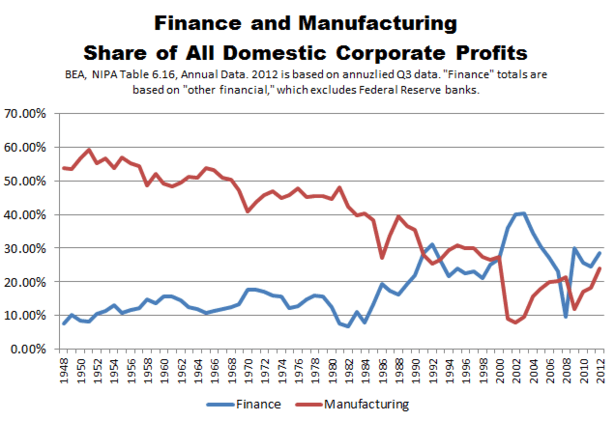 More clearly, the Center on Budget and Policy Priorities (CBPP) includes this chart in "A Guide to Statistics on Historical Trends in Income Inequality," saying, "Census family income data show that the era of shared prosperity ended in the 1970s and illustrate the divergence in income that has emerged since that time." 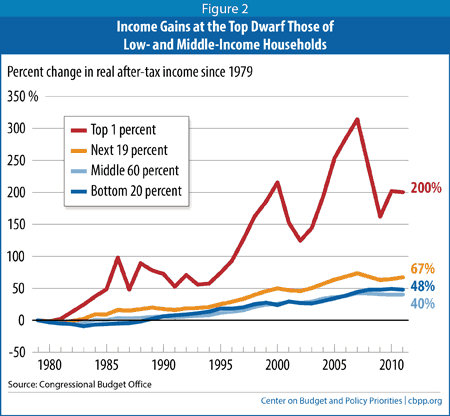 It's time to change our trade policies so they work for We the People not just a few already-wealthy people. We should demand balance. Trade partners should agree to actually "trade" with us, not just sell to us. We should also balance the interests of working people, the environment and other stakeholders with the interests of businesses in our trade negotiations. We should set a priority of lifting wages and prosperity on all sides of trade borders, instead of a priority of lifting only the world's 1 percent.