Silicon Valley is an area of contrasts. When you stop at a traffic light in Silicon Valley you will often find a Maserati or Tesla on one side of you and a beaten up, 15-year-old Accord on the other. It seems there are more high-end Mercedes, Jaguars, Bentleys or the occasional Maybach than in other areas.

Silicon Valley companies, many run by stock-billionaires, pay a lot at the top, and squat at the bottom. There are the lucky employees, and a huge number of "contractors" – employees who are not called employees. The employees that reach over a certain age are discarded.

There are not a lot of people in the space between Silicon Valley's top and its bottom. One in three Silicon Valley workers cannot even afford to live anywhere within a one-hour drive. The regular three-bedroom house costs a million dollars and don't even ask about the rents (starting at more than $2,000 a month for a one bedroom apartment), but on the streets in working-class neighborhoods there are so many cars parked that you can barely pass – because there are so many people and families crammed into the housing. And, of course, the traffic is terrible, but you have to use a car because public transportation is cut back due to tax-dodging by giant companies like those in Silicon Valley.

The blatant lack of diversity in Silicon Valley companies is a big part of the problem. At the top of these companies it's disproportionately white males. At the bottom it's mostly people of color. In fact, according to the report "Tech’s Diversity Problem: More Than Meets the Eye," "Among the companies who have released data – Facebook, Twitter, LinkedIn, Yahoo, Google and eBay – the portion of their U.S.-based tech workers who were either Black or Latino ranged between 3 to 4 percent."

In the midst of all this, a number of labor, faith and community groups have joined together to address income inequality, create affordable housing and urge corporate responsibility among tech companies. On Friday I attended the launch of the new coalition, called Silicon Valley Rising, which will engage in a comprehensive campaign to "raise wages, create affordable housing and build a tech economy that works for everyone." From their website:

While tech companies make massive profits, the workers who keep them running smoothly have been left behind.

Silicon Valley Rising is here to fix that by raising wages, creating affordable housing, and growing our middle class.

The launch event took place at McDonnell Hall, Our Lady of Guadalupe Catholic Church. As significant as this event was, the location of the event amplified its significance. Two blocks from the event I passed this sign: 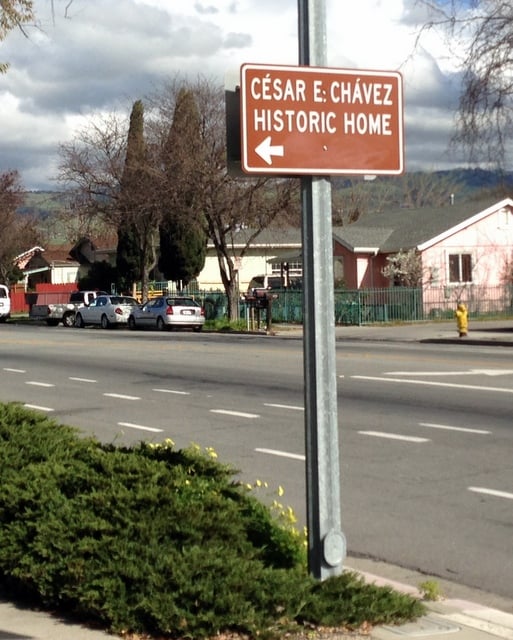 McDonnell Hall, the building where the coalition launch event was held, is in line to become a national historic landmark.

Chavez met there with other members of the Community Service Organization in the 1950s and 1960s to plan voter registration drives, civil rights lawsuits and legislative campaigns. They also taught citizenship and literacy classes. He later employed those skills to organize the United Farm Workers union and the famous grape boycott that launched him to national prominence as a civil rights leader and advocate of nonviolent protest.

The group will focus its considerable membership and lobbying strength on improving wages, increasing affordable housing options for renters and holding tech companies accountable for how contract workers are compensated.

Father Jon Pedigo, pastor of the church, began by reading, "Come now, you rich people, weep and wail for the miseries that are coming to you... You have condemned and murdered the righteous one, who does not resist you." 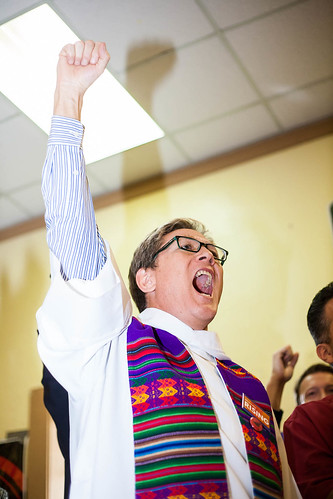 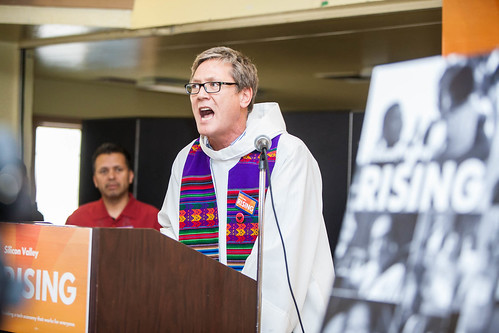 As Henry Millstein reports, "Another local progressive religious leader, Rabbi Dana Magat, read a passage from the prophet Jeremiah denouncing a king "who makes his neighbors work for nothing and does not give them their wages," concluding, "It's time to rise up!" to which the crowd responded with shouts of "¡Sí se puede!"" 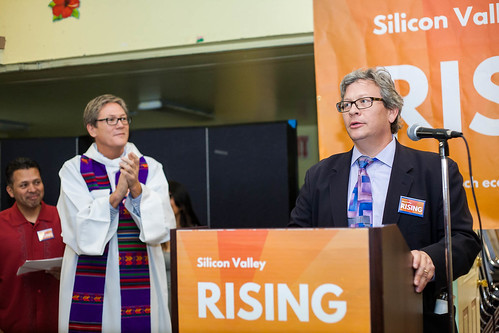 Ben Field, executive director of the South Bay Labor Council, said "No one who works hard and plays by the rules should live in poverty. Silicon Valley Rising is a comprehensive effort to allow everyone to thrive in Silicon Valley's tech economy." 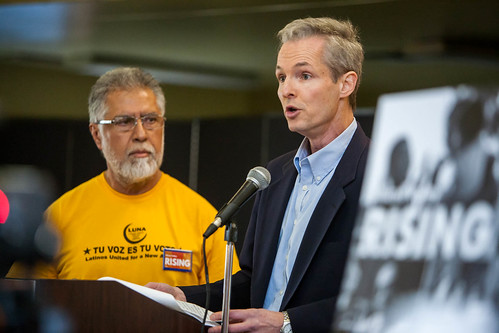 Rome Aloise, VP At-Large of the Teamsters, spoke about the bus drivers. Drivers who work for the company that contracts with Apple, eBay, Genentech, Yahoo and Zynga to drive their employees to and from work were voting on a contract at the same time as the launch event was taking place. (The results were 104-38 in favor of the union.) Facebook's drivers had already unionized and received a raise of up to $9 an hour, an end to split shifts requiring drivers to sit around for hours with no pay, health benefits and a retirement plan. "For the companies it is about what they spend on ping pong balls," Aloise said. 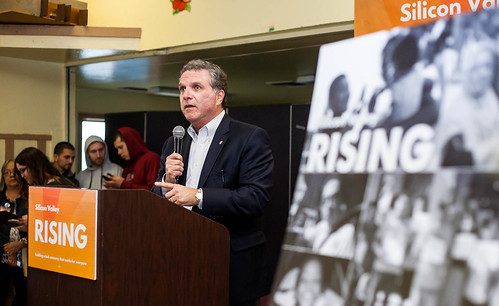 Partners in the coalition are:

Spotted at the event: 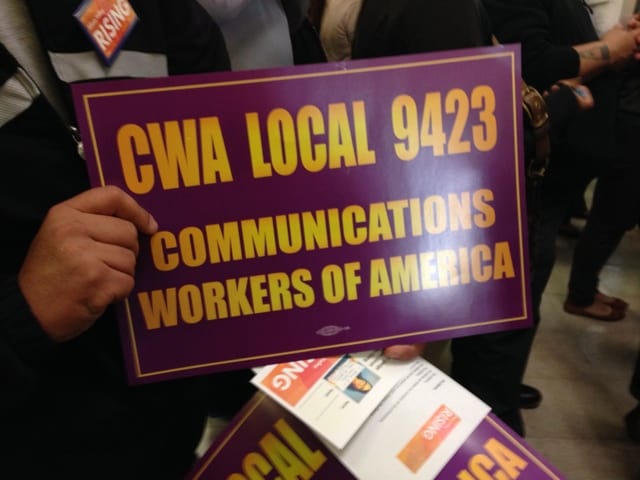 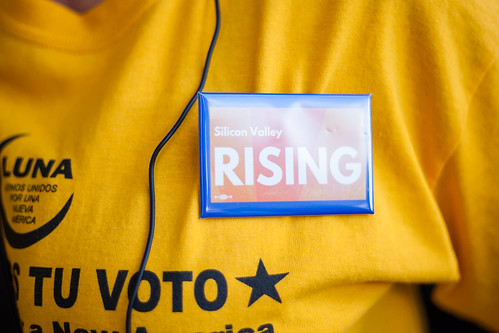 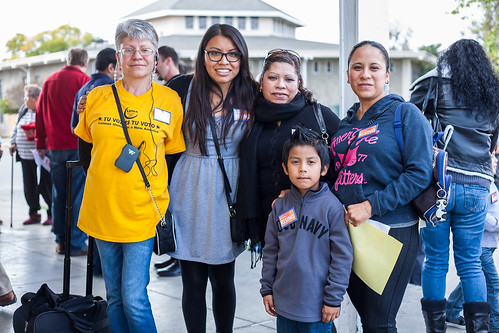 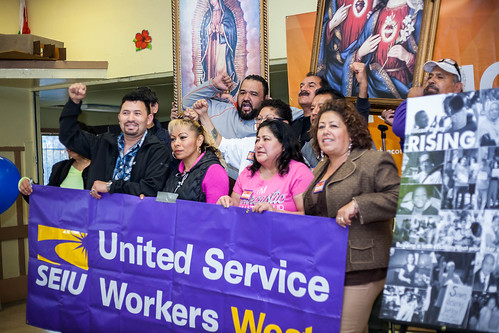 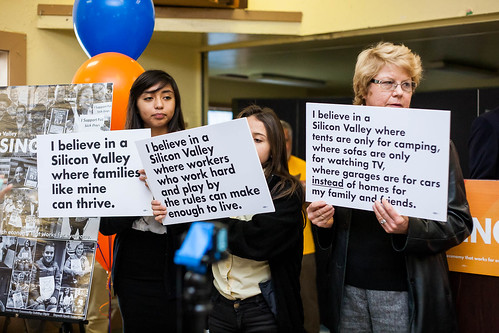 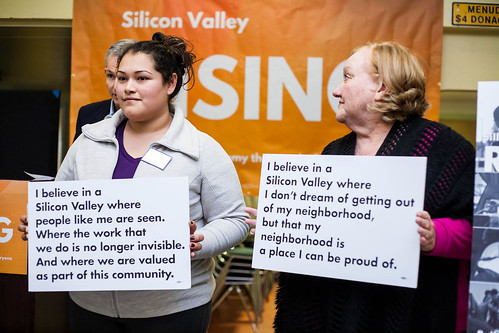 The organizing effort that led to the formation of the Silicon Valley Rising coalition is already achieving results. Apple announced on Tuesday it will drop its contractor and make its security officers employees with benefits and predictable working hours. From a Silicon Valley Business Journal news report, "Apple to hire security guards as full-time employees as organized labor gains ground":

"Apple recently completed a comprehensive, year-long review of its security program and we've decided to directly hire a number of key onsite security roles for Apple's Silicon Valley operations which are currently contract positions," Apple said in statement. "We will be hiring a large number of full-time people to handle our day-to day security needs. We hope that virtually all of these positions will be filled by employees from our current security vendor and we're working closely with them on this process."

This is a big deal and Silicon Valley Rising is a big deal. This and organizing efforts like it across the country will help improve pay, benefits and working conditions for millions of people.