'Protect Your Vote' Campaign Calls For a Constitutional Right To Vote 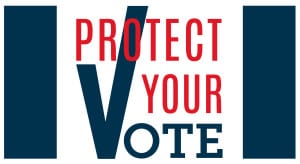 That's why this week Rep. Keith Ellison (D-Minn.) and Rep. Mark Pocan (D-Wis.) have launched a campaign to win support for a constitutional amendment that would give citizens the right to vote. They are asking supporters to sign up as citizen co-sponsors. The Campaign for America's Future is an organizational supporter, along with Daily Kos and the Rainbow Push Coalition.

The amendment is simple: "Every citizen of the United States, who is of legal voting age, shall have the fundamental right to vote in any public election held in the jurisdiction in which the citizen resides."

That amendment would complete the work started by the Voting Rights Act almost 50 years ago, which prohibited discrimination at the polls, and undo the damage done by the Supreme Court's Citizens United ruling five years ago, which in effect said that "corporations are people, my friend," only with more uncurbed capacity to rig election results to favor their interests.

Between two-thirds and three-quarters of Americans, according to the polling we've been tracking on our Populism Majority website, support some curb on the power of corporations to influence elections. One poll shows 73 percent support for a constitutional amendment that could overturn Citizens United.

But one area where this amendment would be especially meaningful – and a reason many conservatives would put up fierce resistance against it – is in countering the wave of voter suppression measures put in place in the past four years. A citizen with a constitutionally guaranteed right to vote would have a powerful weapon against a legislature that sought to hinder that right through voter-ID laws or inequitable limits on early voting.

It would take the approval of two-thirds of both houses of Congress, and ratification by three-quarters of the states, to add this amendment. It is a high hurdle, especially in today's political environment. But woven into the DNA of every progressive fight for economic justice is the need to rein in the dominant "dollarocracy" and replace it with true democracy. That's what makes this right-to-vote constitutional amendment worth fighting for.