The secret Trans-Pacific Partnership (TPP) negotiations resumed this week, this time in Washington. TPP is a massive agreement that sets up new rules for over 40 percent of the global economy. It will have profound effects on our jobs, our standard of living now and in the future and our ability to make a living as a country. Oddly, though, as of Monday morning you have to read about it in Japan Times because few-to-no U.S. media outlets are covering it.

In spite of the lack of American media coverage of this tremendously important agreement, representatives of labor, environmental, family farm, consumer, Internet freedom, public health, faith, human rights and community organizations held a rally Monday outside the office of the U.S. Trade Representative. These organizations represent "stakeholders" from all countries that are denied a seat at the TPP negotiating table.

Here's what the Japan Times reported, in "TPP talks get back underway in Washington":

Chief negotiators from 12 countries involved in the Trans-Pacific Partnership initiative resumed negotiations in Washington after their leaders reaffirmed last month they will conclude an agreement as soon as possible.

Here are a few stories about the media blackout of this important treaty – all in the non-corporate media:

At today's rally in Washington, George Kohl, senior director of Communications Workers of America, said, "We believe in trade. We are fighting against old trade policy that literally guarantees corporate profits at the expense of working families in all nations. In the weeks ahead, we will mobilize like never before against Fast Track authorizing legislation and the TPP, and for 21st century trade that gives workers’ rights, environmental issues and other concerns the same standing as corporate profits." 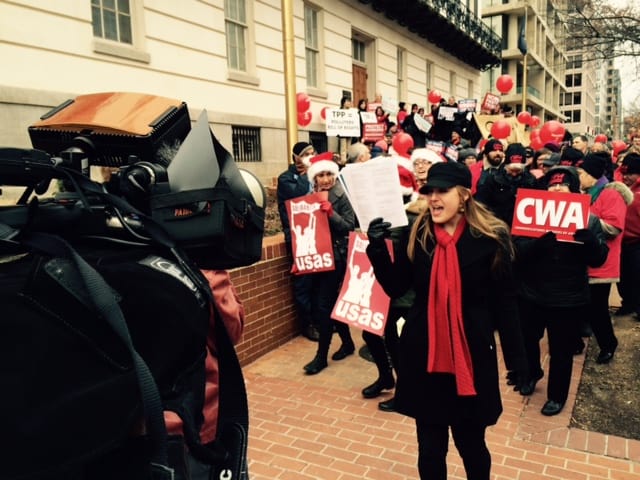 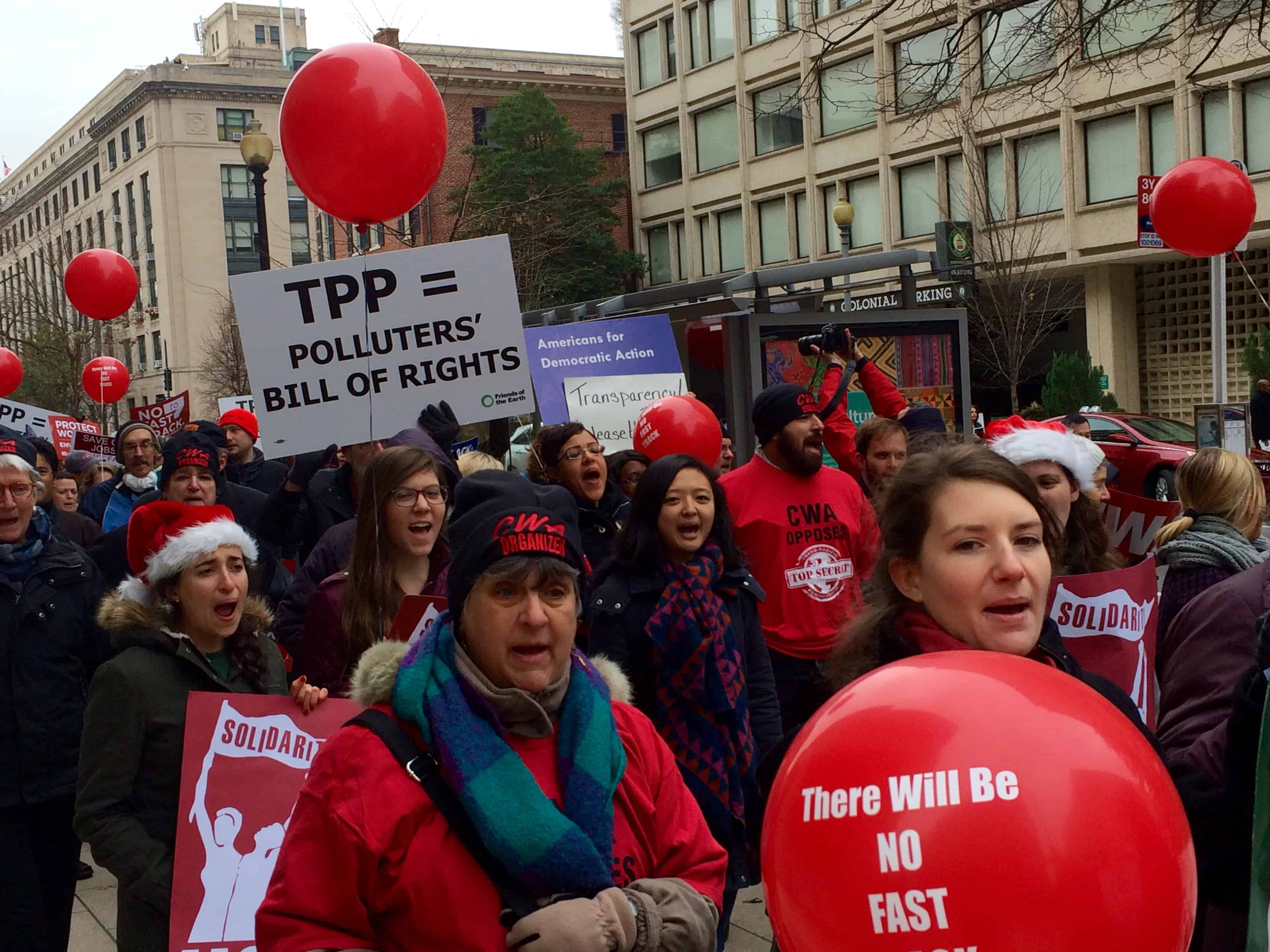 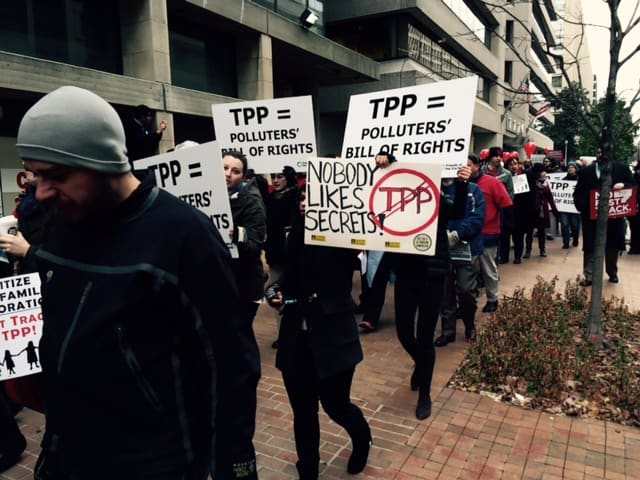 Wednesday at 11 a.m. the AFL-CIO is holding a TPP briefing on "What Negotiators Should Be Discussing Behind Closed Doors," at their Washington headquarters at 815 16th St, NW.

"While the Obama administration meets behind closed doors this week with representatives of the countries involved in negotiating the Trans Pacific Partnership (TPP), the AFL-CIO will host a briefing outlining what the negotiators should be discussing. The briefing will highlight what must be included in the negotiations for it to truly work for working people and how the TPP will only gain labor’s support if it will create American jobs and promote high labor and environmental standards. The briefing follows a week of increased Congressional scrutiny on the negotiations and the involved countries’ history of labor abuses."

The TPP negotiations are secret, and the kids of people at that D.C. rally are not represented at the bargaining table. But corporate representatives have access to drafts of the treaty, and the negotiators typically come from and expect to go to lucrative corporate positions after the treaty is finalized – assuming they "play ball."

While we do not know exactly what is being negotiated, we do know from leaks – and previous "NAFTA-style" trade agreements – tell us what to expect. Much of TPP is about "investor protections" and not trade at all. These provisions allow corporations to sue governments for doing things that infringe on profits – like laws and regulations protecting the environment, worker safety, consumers and the health of citizens. For example, under similar agreements already in effect tobacco companies are suing governments to block anti-smoking efforts that protect the health of citizens!

Members of Congress are very concerned about the transparency of the TPP negotiating process. On a call Monday, Reps. Rosa DeLauro (D-Conn.), Louise Slaughter (D-N.Y.), Tim Ryan (D-Ohio), Keith Ellison (D-Minn.) and (rock star) Dan Kildee (D-Mich.) expressed their concerns about the secrecy of TPP as well as the failure to address currency manipulation in the agreement.

Sen. Elizabeth Warren (D-Mass.) put her finger on the secrecy problem when she said, "Why are the trade talks secret? You’ll love this answer. Boy, the things you learn on Capitol Hill. I actually have had supporters of the deal say to me, 'They have to be secret, because if the American people knew what was actually in them, they would be opposed.'"

Currency manipulation is a major trade problem. For example, we could restore up to 5.8 million American jobs, cut our trade deficit by $500 billion a year and increase our gross domestic product by $720 billion just by addressing currency manipulation. (Click through for details.)

For more information about the TPP, visit these sites:

Sum of Us: Sign the petition to governments worldwide.

CWA's TPP info, their Stop Fast Track petition and send this letter to Congress: Oppose Fast Track and the TPP