Bernie Sanders Lays Down the Gauntlet 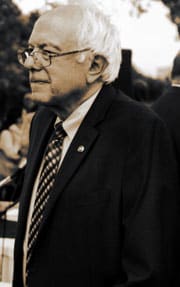 “The question of our time,” he said in a fiery speech, “is whether or not we are prepared to take on the enormous economic and political power of the billionaire class or do we continue to slide into economic and political oligarchy.” Two days later, Sanders joined striking fast food workers and federal contract workers who were demanding a living wage and the right to bargain collectively. Sanders is openly considering whether to enter the presidential race in 2016. His "Economic Agenda for America" provides a building block for that challenge. (He will also champion a less interventionist and costly foreign policy.)

His reforms strikingly highlight the great gulf between what most Americans believe and what the politicians they elect enact. Polls show a majority support for virtually all of Sanders’ reforms. In contrast, Republicans in control of Congress, almost in lockstep, oppose each one of them. And the Wall Street wing of the Democratic Party bridles at many.

What follows is a summary of the Sanders agenda accompanied by polling on where the public is. (Specific sources for the polling are available from the Campaign for America’s Future’s PopulistMajority.org, a compilation of polls detailing the views of America’s populist majority.)

Sanders hasn’t yet decided whether he has the desire and the necessary activist support to make a run for the presidency. But one thing is clear: His agenda on the central issue of the day – the economy – already earns widespread approval.

The Sanders Economic Agenda for America (reordered and shortened)

1. “Raise the minimum wage to a living wage. No one in this country who works 40 hours a week should live in poverty."

Congressional Republicans refuse even to allow the minimum wage hike a vote in the House. But Americans are clear. A Pew Research Center poll in January 2014 reported that nearly three-fourths of adults (73 percent) supported raising the minimum wage, including a majority of Republicans. This fall, minimum wage initiatives passed in red states like Alaska, Arkansas, Nebraska and South Dakota. Seattle and San Francisco have voted to lift their minimum wage to $15.00 an hour, and Chicago to $13.00, with many other cities beginning to move.

2. "Women workers today earn 78 percent of what their male counterparts make. We need pay equity in our country – equal pay for equal work."

3. "Quality education in America, from child care to higher education, must be affordable for all."

Republicans have blocked President Obama’s call for investing in pre-K, and filibustered Sen. Elizabeth Warren’s legislation to allow refinancing of student debt. A 2014 bipartisan poll for the First Five Years Fund found that 71 percent of voters, including 60 percent of Republicans, supported more investment in early childhood education from zero to five years old. A November 2014 NBC/Wall Street Journal poll reported that 82 percent of Americans support providing access to lower cost student loans and providing more time to those who are paying off their student loan debt.

Despite lobbying by the Chamber of Commerce, Republicans have rejected Obama's relatively modest measures to invest in rebuilding America. As an NBC/Wall Street Journal poll reveals, three-fourths of Americans support increased spending on infrastructure projects like roads and bridges. And a 2014 poll by the Benenson Strategy group reports that two-thirds believe the U.S. needs to increase investments in infrastructure and education rather than worrying about long-term debt.

5. "The United States must lead the world in reversing climate change and make certain that this planet is habitable for our children and grandchildren."

We must transform our energy system away from fossil fuels and into energy efficiency and sustainable energies. Transforming our energy system will not only protect the environment, it will create good paying jobs.

Republicans, notoriously, are largely deniers of climate change, scorning green initiatives of any sort. Yet a June ABC/Washington Post poll reports that 70 percent of Americans believe that the federal government should require states to limit the amount of greenhouse gases produced within their borders. Benenson polling finds that 83 percent agree we need to invest more in the development of renewable energy sources like solar and wind.

6. "Millions of seniors live in poverty and we have the highest rate of childhood poverty of any major country. We must strengthen the social safety net, not weaken it. Instead of cutting Social Security, Medicare, Medicaid and nutrition programs, we should be expanding these programs."

Republicans and many Democrats, including the co-chairs of the President’s ill-fated fiscal commission, have supported cutting Social Security. The Republican budget proposals have proposed deep cuts in Medicaid, food stamps and other nutrition programs. Yet, 79 percent of Americans believe that it is more important to reserve Social Security benefits than keep taxes low. A YouGov/Huffington Post poll found 61 percent favored food stamp funding kept the same (33 percent) or increased (28 percent). 55 percent support expanding Medicaid under Obamacare.

7. "At a time of massive wealth and income inequality, we need a progressive tax system in this country which is based on ability to pay."

The measures above gain widespread approval among Democratic politicians and candidates, with dramatic differences when it comes to the concrete provisions. But Sanders goes on to propose a series of structural reforms critical to lifting wages across the board. Almost all are still popular with Americans, but many face opposition from Democrats as well as Republicans.

8. "We need legislation which makes it clear that when a majority of workers sign cards in support of a union, they can form a union."

In a Pew Research Center survey conducted in June 2013, about half (51 percent) of Americans said they had favorable opinions of labor unions, versus 42 percent who said they had unfavorable opinions about them. That was the highest favorability rating since 2007. In a separate 2012 survey, 64 percent of Americans agreed that unions were necessary to protect working people (though 57 percent also agreed that unions had “too much power”).

In 2009, when card check was before the Congress, a Gallup Poll found that just over half of Americans, 53 percent, favored the new law that would make it easier for labor unions to organize workers; 39 percent opposed it.

9. "We must end our disastrous trade policies (NAFTA, CAFTA, PNTR with China, etc.) which enable corporate America to shut down plants in this country and move to China and other low-wage countries."

Americans want a different course. As PopulistMajority.org details, poll after poll shows broad majorities (over 60 percent) want to crack down on countries like China, oppose fast track for the TPP deal, and prefer offering countries a tax break for jobs they create here at home.

10. "Today, six huge Wall Street financial institutions have assets equivalent to 61 percent of our gross domestic product - over $9.8 trillion...They are too powerful to be reformed. They must be broken up."

11. "We need to develop new economic models to increase job creation and productivity. Instead of giving huge tax breaks to corporations which ship our jobs to China and other low-wage countries, we need to provide assistance to workers who want to purchase their own businesses by establishing worker-owned cooperatives."

Support for cooperatives and worker-owned enterprises is only emerging as a national issue. But public attitudes have always favored such initiatives.

12. "The United States must join the rest of the industrialized world and recognize that health care is a right of all, and not a privilege. We need to establish a Medicare-for-all, single-payer system."

While most Americans favor a national health care system, support for single payer or Medicare for all remains unformed. A Rasmussen Reports poll in April 2014 found that only 37 percent of Americans favored single-payer. And although the proposal has largely been out of the public debate since before Obamacare became law, earlier polling also didn’t find clear support. America will end up with something like Medicare for All, but clearly only after exhausting every other alternative.

Americans, of course, are notoriously skeptical about “big government” and government spending, largely because they assume, not without reason, that government serves the rich and various entrenched special interests. By being willing to take on Big Oil (with green energy), global corporations (with tax and trade reform) and Wall Street (by breaking up the big banks), Sanders shows clearly what side he is on. He does what Sen. Chuck Schumer argued is necessary: demonstrates a populist temper that can overcome the doubts of a cynical electorate.

We don’t know whether Sanders will choose to run. But we do know that his agenda will have broad appeal – and will draw clear lines with rival candidates. If Hillary Clinton enters the race, Sanders would surely offer a choice and not an echo.