Before the election, progressive organizations like Campaign for America's Future were urging Democrats to run "populist" campaigns based on popular policies supported by majorities — sometimes vast majorities — of the public. The idea was that espousing popular policies would give people a reason to show up and vote for them.

But the "conventional wisdom" of Washington-based consultants was to tell candidates to repudiate the "dirty hippies" (DH) that make up the Democratic "base," and try to appeal to what they called "the center," which means older white right-leaning people who are consider the "traditional" voter.

These consultants told candidates to "distance themselves" from their own President and his DH policies — like health care reform, protecting the environment, and giving the millions of immigrants who are here without documentation a path to legal residence and citizenship. The idea was that Democratic "base voters" (African Americans, Hispanics, union members, young women) "have no where else to go," and would be forced to vote for them anyway.

Now we have election results showing that a lot of "base" Democrats (DHs) didn't feel they had a reason to vote for those candidates. At the same time ballot initiatives calling for raising the minimum wage, legalizing marijuana, providing sick pay to workers passed, while conservative ballot initiatives like "personhood" for fetuses failed.

A Washington Post article, "On his way to a slim victory in a changing Va., Warner may have wooed wrong voters," wonders whether "Warner would have won bigger if he had eschewed the middle and embraced the left, and whether the winning path for moderates that Warner forged during his own bid for governor 13 years ago is becoming extinct."

A self-described “radical centrist” who prided himself on his appeal among Republicans and independents, Warner steadfastly continued to court those voters despite strong evidence that their tolerance for Democrats had dramatically waned.

... By positioning himself as a moderate, he may have missed a chance to gin up more enthusiasm within the state’s expanding Democratic base, earning fewer votes in such deep-blue communities as Arlington County and Alexandria than left-of-Warner Gov. Terry McAuliffe (D) did a year ago.

At Wonkette Kaili Joy Gray takes it a bit further, in "Democrats Have Great Exciting New Idea: Being Democrats":

Here’s an idea that’s so crazy, it just might work! After the thorough ass-kicking the Democratic Party suffered on Election Day, some Democrats are considering the possibility that maybe running “Democratic” candidates who are embarrassed to be Democrats is not the best way to appeal to the Democratic Party. Crazy, huh? With candidates refusing to support Obamacare, refusing to support Democratic policies, refusing to even say “Hell, yes, I voted for Barack Obama because I am a Democrat, DUH,” the new minority is thinking maybe it’s time to get back to being Democrats.

Who bothered to vote? See this chart from TPM, 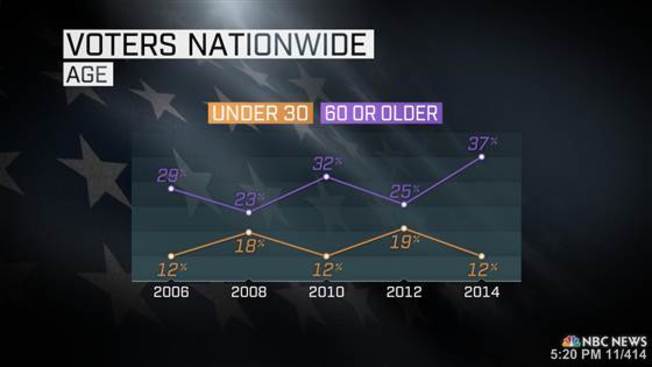 By thinking they could "attract votes from the center-right" and "distance themselves from" the President and core Democratic policies many Democratic candidates didn't give base Democrats a reason to vote, so they didn't.