What I Learned From My Minimum Wage Job

Sen. Rand Paul mocked President and Mrs. Obama for wanting their daughters to experience working for minimum wage. My own experience taught me “the value of work,” and to value the workers for whom earning a paycheck isn’t always fun, stimulating, or fair.

In a Parade magazine interview last month, President and Mrs. Obama said they wanted their daughters to experience working for minimum wage, to  “get a taste of what it’s like to do that real hard work.” President Obama added that there is value in learning that “[G]oing to work and getting a paycheck is not always fun, not always stimulating, not always fair. But that’s what most folks go through every single day.” 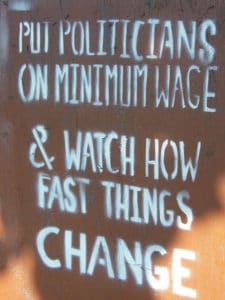 During a speech to Silicon Valley Republicans in San Francisco, Paul (R-Ky.) mocked the Obamas, and repeated the conservative belief that minimum-wage work is “temporary” and thus shouldn’t be increased to a living wage. Comparing his own parenting style to the Obama’s, Paul said, "It’s a chance to get started. I see my son come home with his tips. And he’s got cash in his hand and he’s proud of himself. I don’t want him to stop there."

Without a hint of irony, Paul added, “But he’s working and he’s understanding the value of work. We shouldn’t disparage that.”

When I was 16 years old, about the same age as the Obama’s oldest daughter, Malia, I got my first job — a minimum wage job, working the grill at McDonald’s.

It was the hardest work I’d ever done at that point in my life. I sweated from the heat of the grill. Timers and beepers announced every step of every task. When it was quiet, I carried heavy boxes of burgers and condiments, and awkward trays of buns, across the slippery floor to restock the grill.

Mowing the lawn and washing the family cars was nothing compared to working at McDonald’s. I’d come home reeking of burgers and pickle juice, covered in a layer of grease that felt like it would never wash off, more tired than I’d ever been — after being on my feet for hours, bending over the grill and living heavy boxes — for $3.35 an hour. I was grateful I didn’t have to do it again for a day or two.

When some of my classmates came in, I felt embarrassed and tried to disappear. I got over that, because I had a job to do. But I also developed a camaraderie with my coworkers. Between supporting each other through lunch and dinner rushes, we shared jokes while wiping down counters, talked about our lives as we restocked fries. I was ashamed that I was ever embarrassed about working alongside them. By the time I'd often serve my friends at the register or drive-through, that shame was gone.

The experience punctured my bubble of economic privilege. I realized that, except for a handful who rose to management, it wasn’t a “temporary” job for many of my coworkers. I was working to earn spending money and to save for college. Many of them were supporting themselves and their families. My paycheck went to buy clothes, music, and other items I wanted. Many of them counted on theirs to help pay for rent, groceries or utilities.

My parents always told me never to put someone else down unless I could “walk a mile in their shoes.”

Republicans have disparaged low-wage workers who rely on programs like food stamps — because they don’t earn enough to pay for basics like food, shelter, medical care, and transportation — but can’t walk a step in their shoes. Most Republicans say they can’t live off minimum wage, but the vast majority oppose raising it.

Senate Republicans just voted to filibuster a minimum wage increase that still wouldn’t amount to a livable wage. None of those Senate Republicans will join former Ohio Gov. Ted Strickland, Rep. Jan Schakowsky (D-Ill.), and Rep. Tim Ryan (D-Ohio) in taking up the “Live the Wage” challenge this week, and “step into the shoes of a minimum wage worker and live for one week on just $77.” None will even try to walk in the shoes of low-wage workers.

My brief experience hardly counts as walking a “mile” in the shoes of workers who struggle to get by every day on minimum wage — or less. Economic privilege gave me the option to walk away.

A manager took me off the schedule in retaliation for declining his request to come in on one of my days off. I decided I’d had enough. I quit midway through my senior year of high school, so I could focus preparing for graduation and college in the fall. (Incidentally, today Reps. George Miller (D-Calif.) and Rosa DeLauro (D-Conn.) introduced the “Schedules That Work Act” to protect workers from such practices.)  Many of the coworkers I left behind didn’t have those options.

Like Sen. Paul’s son, working at McDonald’s was “temporary” for me. I wasn’t going to stop there. I was going to college, to get an education that would hopefully lead to better-paying work. But my minimum wage job gave a different kind of education. Yes, it taught me “the value of work” that Sen. Paul wants his son to learn. Yet, it also taught me what I suspect the Obamas want their daughters to learn: It taught me to value the workers for whom “going to work and getting a paycheck is not always fun, not always stimulating, not always fair,” but who do it every day.