Is Walgreens Trying To Leave The U.S.?

Here's the latest corporate tax scam: Companies are renouncing their U.S. corporate status and claiming that their headquarters are instead located in one or some other low-tax country, like Switzerland. The technical word for what they are doing is an "inversion." It involves buying or merging with a company in the new country while actually keeping the same employees, operations, sales outlets and other assets right here.

Lately Walgreens – the nation’s largest pharmacy retailer with 8,200 stores and locations in all 50 states – is in the news because they are considering an "inversion." The company is deciding whether to renounce its U.S. corporate status and instead claim on paper to be a Swiss company. To do this it will merge with a Swiss company, Alliance Boots. This would let them dodge billions in U.S. taxes. According to Americans for Tax Fairness, this move would mean Walgreens avoids paying $4 billion of taxes they would otherwise owe to the U.S. government in the next five years.

Walgreens is doing this even though, as Americans for Tax Fairness points out:

Repeat: Walgreens receives a quarter of its revenue from programs like Medicare and Medicaid that are funded by U.S. taxpayers, but is renouncing its U.S. "citizenship" to avoid paying taxes for the U.S. services it uses and customers it gets. (How long will it be before we'll be hearing another round of "we're broke" and have to cut Medicare and Medicaid?)

But wait, there's even more. Andrew Ross Sorkin at The New York Times' Dealbook points out:

[Illinois] gave Walgreen $46 million in corporate income tax credits over 10 years in exchange for a pledge to create 500 jobs and invest in upgrading its offices. The state also provided $625,000 in training money and $875,000 in other tax incentives.

Walgreens, collector of gobs of tax dollars, is preparing to renounce citizenship and stop paying taxes. But they'll still be benefitting from the roads and schools and courts and military those tax dollars pay for – and will still be collecting those tax dollars from government programs like Medicare and Medicaid.

By treaty, the U.S. government can’t (and shouldn’t) discriminate against foreign corporations offering as good if not better deals than American companies offer. So if [the Walgreen Company] as a Swiss company continues to fill Medicaid and Medicare payments as well as, say, CVS, it’s likely that Walgreen will continue to earn almost a quarter of its $72 billion annual revenues directly from the U.S. government.

... In 2010 it lobbied for and got a special provision in the Dodd-Frank Act, limiting the fees banks are allowed to charge merchants for credit-card transactions — resulting in a huge saving for Walgreen. If it becomes a Swiss citizen, the days of special provisions should be over.

... Since the 2010 election cycle, Walgreen’s Political Action Committee has spent $991,030 on federal elections. If it becomes a Swiss corporation, it shouldn’t be able to spend a penny more.

One more thing. If Walgreens does this "inversion" it avoids $4 billion in U.S. taxes over the next five years. Here is what $4 billion could pay for: 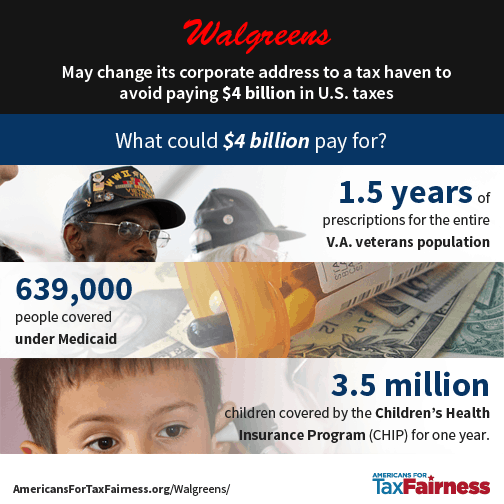 Companies that invert are trying to dodge U.S. taxes. They say taxes are too high in the country that provides them with educated employees, good courts, police and military protection, infrastructure (admittedly deteriorating since the Reagan tax/budget cuts...), and other resources. If they "move" to Switzerland, Ireland, the Cayman Islands, whatever, they will still be able to get all of those things, still get fat government contracts, still get what's left of our middle class as customers, etc.

The top U.S. corporate tax rate is higher than other countries, but there is a story behind that. First, this isn't the "effective tax rate" – the rate they actually pay after all the tax-avoidance schemes and various breaks are taken into account. The effective rate for the companies that pay any taxes at all (several don't) is currently 13 percent on worldwide income.

But there's a more important reason at work. Our corporate tax rate used to be much higher than it is now. Companies complained that it was higher than other countries, so Congress danced with the ones that brung 'em and lowered the rate. Then these companies went from country to country complaining that the U.S. rate was much lower, they were not "competitive" and had to lower their rate, too. (Alliance Boots, the company Walgreens might merge with, moved from Britain to Switzerland in 2008 to avoid "high" British taxes.) And now that the giant corporations have made the circuit, playing one country against another, extorting lower taxes in country after country, they're back here. It's called a downward spiral, a race to the bottom.

A Bill In Congress

The House passed an amendment by a vote of 221-200 denying federal contracts to American companies that have reincorporated in Bermuda or the Cayman Islands. This is not yet law, but is attached to the Energy/Water appropriations bill. It is a beginning, but only lists these two tax haven countries and won't affect Walgreens, should they make themselves appear to be a Swiss company.

The "Stop Corporate Inversions Act of 2014" is a more comprehensive effort that "increases the needed percentage change in stock ownership from 20 percent to 50 percent and provides that the merged company will nevertheless continue to be treated as a domestic U.S. company for tax purposes if management and control of the merged company remains in the U.S. and either 25 percent of its employees or sales or assets are located in the U.S." Republicans will obstruct the bill.