Fast food CEO Andy Puzder says that raising the minimum wage will harm workers and kill job growth. A new study of the 13 states that have tried it – including eight states where Puzder runs restaurants – says otherwise.

Andy Puzder, CEO of CKE Restaurants, told Yahoo! Finance that he opposes raising the minimum wage because he believes it will harm workers in his industry. Puzder — who took home about $4.4 million in 2012, according to Forbes magazine— earned about 291 times what workers at his company’s Hardee’s and Carl’s Jr. restaurants earn in a year.

Puzder repeats the same old, debunked, right-wing myths about raising the minimum wage. He claims that minimum wage increases would lead to fewer jobs because, “What businesses do is they increase their prices and they move to automation so you have less jobs.” (In 2010, CKE began implementing touchscreen automation to take orders in all company-owned restaurants.)

The problem that that the facts don’t support Puzder’s claims. In the absence of congressional action, states and municipalities have  passed their own minimum wage increases, without any of the disastrous economic consequences Puzder predicts.

A Center for Economic and Policy Research study of the 13 states that increased their minimum wage at the beginning of this year knocks down the argument that raising the minimum wage kills jobs. Connecticut, New Jersey, New York, and Rhode Island passed laws increasing their minimum wage. In Arizona, Colorado, Florida, Missouri, Montana, Ohio, Oregon, Vermont, and Washington State, minimum wage increased in line with inflation. (CKE has restaurants in all but five of the 13 states — Connecticut, New Jersey, New York, Rhode Island, and Vermont.) 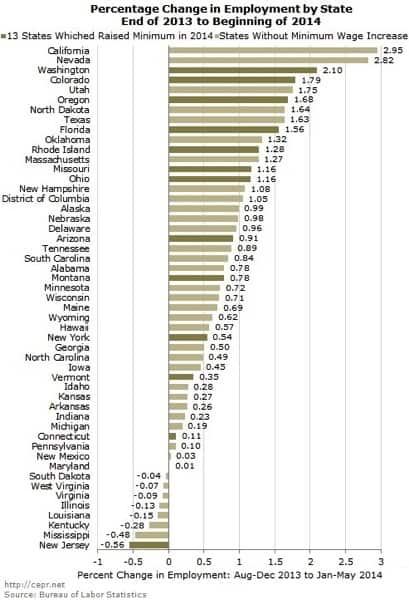 Puzder argues that teenagers pushed out of the market by minimum wage increases will instead be, “at home looking at posters from the last election or waiting for mom to make dinner, as opposed to being out there actually working, and getting the experience they need to go forward in life.” But 75 percent of minimum wage earners are adults.

Puzder says adults are working at minimum wage jobs because companies are reducing worker hours due to Obamacare. The “recovery” has created far more low-wage jobs than better paying jobs. It’s more likely that adults are working in fast-food and other minimum wage jobs, because they need to support themselves and their families, and those are the only jobs available.

The CEPR study doesn’t explain why states that increased their minimum wage have higher job growth rates, but it’s not hard to figure out. Minimum wage is not a livable wage in any state. Visit MIT’s Living Wage Calculator, and check just about anywhere in the country. You’ll see that minimum wage isn’t enough to cover basics like food, housing, transportation, medical care and child care. As a result, workers rely on assistance programs like food stamps to help them make up the difference. Increasing the minimum wage puts more money in the hands of workers who spend it on goods and services. That increases demand, which in turn supports existing jobs, and stimulates the creation of new jobs.

Perhaps Puzder subscribes to what I call the “Michele Bachmann School of Economics.” In 2005, Bachmann said, “Literally, if we took away the minimum wage—if conceivably it was gone—we could potentially virtually wipe out unemployment completely because we would be able to offer jobs at whatever level.” Bachmann’s inane point was that almost everyone would have a job if employers could pay workers even less. The 13 states that have taken the lead on raising the minimum wage show that there’s a better way to increase job growth than minimal wages for all.