Senate Republicans filibustered the minimum wage increase. This means the bill doesn't even get a debate, never mind a vote. This is part of their strategy to hold back the economy and then campaign on the bad "Obama" economy.

Meanwhile cities and states are helping their citizens instead of a few greedy billionaires and their giant corporations. Raising the minimum wage not only helps lift people out of poverty, it lowers "safety net" costs like Food Stamps, boosts local businesses and increases income and sales tax revenue.

Seattle is passing a $15 minimum wage, indexed to inflation. The mayor, calling Seattle "an incubator of democracy," is working with businesses to come up with a phase-in plan that takes into account income from tips and employer-provided health insurance.

What About Job Losses?

Republicans say that boosting the minimum wage "costs jobs." (To be fair, they say that anything other than tax cuts for the rich costs jobs.) But study after study shows this is just not true.

1) Companies employ the right number of people to do what is needed to be done. They do not pay people to sit around reading newspapers. Laying off an employee rather than pay a small increase would mean something important to the company isn't going to get done. If a restaurant lays off a waitress or waiter fewer meals will be served. If a store lays off a clerk fewer items will be sold. The reason Starbucks opens outlets down the street from other outlets is to meet the demand without long lines driving customers away.

2) Boosting the pay of millions of people means local businesses have more customers with more money, meaning the stores will have to hire people to meet the increased demand.

In States That Raised Their #MinimumWage in 2014 Had Stronger Job Growth Than Those That Didn't Jeffrey Gianattasio at the Center for Economic and Policy Research (CEPR) compared job growth with and without increases in the minimum and found "little to no evidence for the claim that raising the minimum wage threatens job creation efforts." CEPR included this chart: 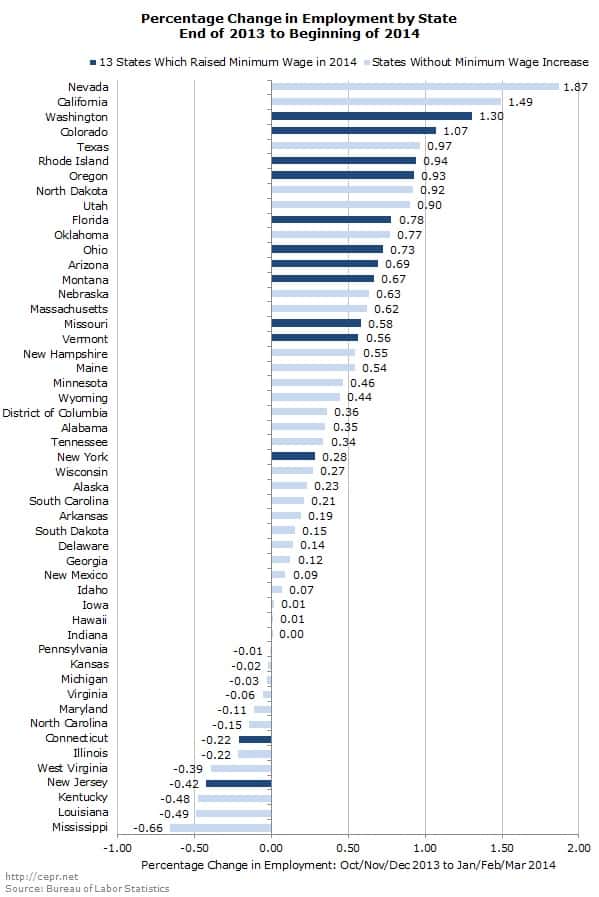 Get The Word Out

Senate Republicans filibustered to keep the minimum wage increase from even coming to a vote, because it would have passed. That is what a filibuster is -- it obstructs the will of the majority.

Again, a majority would have passed the minimum wage increase but Republicans obstructed it. People need to hear this.

The Senate didn't "fail to pass" it. It was not allowed to come up for a vote because the Senate allowed a minority to obstruct the will of the majority.

People need to understand this. Newspapers need to report it. When you see a local paper tell readers that the Senate "failed to pass" this, write a letter to the editor. When you hear it on a radio or TV station, call them and complain. This is not informing people in a way that gives them the information needed to hold elected officials accountable for what they do.

The Senate did not fail, it was obstructed. This is misinformation that makes people apathetic, and feel that there is nowhere to turn, no reason to vote. In fact people can turn against the people who are obstructing the will of the majority and serving a few greedy billionaires and their giant corporations.