Wingnut Week In Review: Another One Bites The Dust

It's been another rough week on the right. A high-profile GOP governor, and potential 2016 presidential contender, could be brought low by a trove of scandalous emails. And it's not Chris Christie. 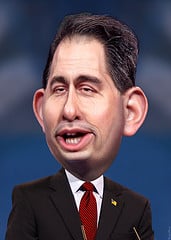 Wisconsin governor Scott Walker is up for reelection this year, and he’s got a big problem. It’s not Wisconsin’s dismal jobs numbers. Sure, under normal circumstances being ranked 40th in job creation would spell trouble for a guy who rode into office promising to create 250,000 jobs in his first term, but ending up losing over 50,000 jobs. But these are not normal circumstances.

A Wisconsin court released thousands of emails written by one of Walker’s former aides. The emails, over 25,000 pages of them, are part of an  investigation into illegal campaign activity by members of Walker’s staff when he was a county executive. The investigation ended, and found no wrongdoing on Walker’s part, but it still has the potential to trip him up as he steps on the national stage.

On the surface, the emails show that Walker presided over an office where aides used personal computers to hide that they were mixing government and campaign business, leading to criminal convictions for two of Walkers’ aides.

Aside from illegal campaign activity, the emails — which were obviously never meant for public consumption — are pretty embarrassing.

Just before the emails were released, Walker said he was sure they contained no surprises. That’s kind of true. The emails offer a detailed look at Scott Walker, and the picture they paint isn’t surprising — but confirms the suspicions about Walker and his closest aides. After all, you can tell a lot about a guy by the company he keeps.

Here’s the rest of the worst in wingnuttery this week.