Clarence Thomas is renowned for his silence during proceedings in the Supreme Court. When he does speak, he reveals himself as utterly vacuous and oblivious to anything resembling reality. Thomas latest comments on race are a supreme example. 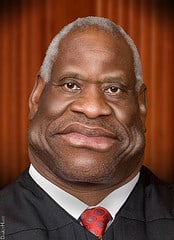 During a recent appearance at Palm Beach Atlantic University, Clarence Thomas said that Americans are too “sensitive” about race. “My sadness is that we are probably today more race and difference-conscious than I was in the 1960s when I went to school,” Thomas said to students. Thomas said that race “rarely” came up while he was growing up in Savannah, GA, and challenged students to, “Name a day it doesn’t come up.”

Thomas either forgot or neglected to mention that the reason race “rarely came up,” was because southern blacks paid dearly for bringing it up. Booker Wright paid the price for talking about life in a racist society during a brief appearance in the 1966 documentary, Mississippi: A Self Portrait.

The only thing more astounding than what Thomas said is where he was when he said it. The murder of unarmed,17-year-old black youth Trayvon Martin and the  acquittal of his killer, George Zimmerman, made Florida the poster-child for the poisonous combination of racial profiling and “Stand Your Ground” laws.

Florida was thrust into the spotlight again this month, when Michael Dunn went on trial in the shooting death of Jordan Davis, another unarmed, 17-year-old, black youth, whose only offense was playing “loud music” and refusing to turn it down. This week, a jury found Dunn guilty of three counts of attempted second-degree murder for trying to kill the other young men who were with Davis, but not for actually killing Davis.

The murder of Jordan Davis, and a jury's failure to convict his killer, speaks volumes about the true state of America's racial sensitivity, and indifference to the lives of young black men.

Who Was Jordan Davis?

Davis first lived with his mother. He went to a private Christian school, and his mother home-schooled him from fourth grade to eight grade. He loved roller skating, was also an excellent swimmer, and studied tae kwon do for 4 and a half years. When he entered eight grade, Davis went to live with his father, because his parents felt he needed stronger discipline. Davis complained about the discipline, but by the 11th grade, Jordan’s grades picked up, and he became more popular at school.

Davis was just growing out of obstreperous adolescence and into manhood. He developed a love for basketball, and even though he wasn’t very good, Davis played as hard as anyone else. “He had that tenacity, that drive” said his best friend Lloyd Haynes. Davis also had plans. He joined the Air Force ROTC in high school, and excelled. He was leaning towards a career in the military, and talked of joining the Marines after being mentored by a cousin who was a Marine.

All of Jordan Davis’ dreams and plans came to an abrupt end on November 23, 2012.

On November 23, 2012, Jordan Davis and his friends — Tevin Thompson, Leland Brunson and Tommie Stornes — were preparing for a night out. After hanging out a mall in Jacksonville, the young men stopped at a gas station around 7:30 p.m., to buy cigarettes and gum. Stornes parked his red Dodge Durango, and went inside to make the purchases. Thompson, Brunson, and Davis waited in the car.

Davis, Thompson, and Brunson listened to music while they waited. The friends were engaged in the time-honored teenage pastime of driving around and listening to loud music that annoys older people, who inevitably shout “Turn that music down.” The genre was hip-hop, the song was “Beef” by Lil Reese, and the volume was  loud enough to shake the windows and mirrors of the Durango.

“Thug,” as Seattle Seahawks cornerback Richard Sherman said, is “an accepted way of calling somebody the N-word now.” Sherman should know. In 25 years, he rose from Compton to Stanford University to the NFL. But it took just 29 seconds for Sherman to become a “thug” in the eye of millions. After beating the San Francisco 49ers for the NFC championship, Sherman appeared to rant wildly during a post-game interview with Fox Sports Erin Andrews.

The reaction was instant, and Americans’ “sensitivity” to race was in full effect. Twitter was ablaze with comments. The following Monday, “thug” was used more than 600 times on American television — more than any other day in the past three years.

Sherman was vindicated, when it was revealed what took place before Sherman’s interview with Andrews. Sherman sealed the Seahawks victory when he intercepted a pass to San Francisco wide receiver Michael Crabtree, with just 22 seconds left in the game. Afterwards, Sherman ran up to Crabtree and said, “Hell of a game,” and extended his hand. Crabtree responded by pushing Sherman’s face mask. Erin Andrews approached Sherman for an interview just seconds later.

Just as so many were ready to label Sherman as a “thug,” without knowing anything about him, Michael Dunn was primed to see Jordan Davis and his friends as “thugs” long before their fatal meeting that night in November. In Dunn’s mind, the site of an SUV full of young black men, represented a threat that put him on high alert.