The public gets it that one-sided trade agreements are shipping jobs out of the country – and they want our government to do something about it.

A new Gallup poll shows that jobs and unemployment has risen to the No. 1 spot on the country's "most important problem" list. At the same time another poll, this one of likely voters, confirms this and drills down to find that voters overwhelmingly see unfair trade agreements and outsourcing as a main cause of our job problem.

The poll of likely voters, commissioned by the Alliance for American Manufacturing (AAM), agreed with Gallup that job concerns are at the top of voters’ agendas. But this poll drills down and shows that manufacturing and the jobs it creates are seen as the most critical component of our economy.

Among the poll's findings:

The AAM poll shows that voters "get it" that our country's trade policies are a problem. 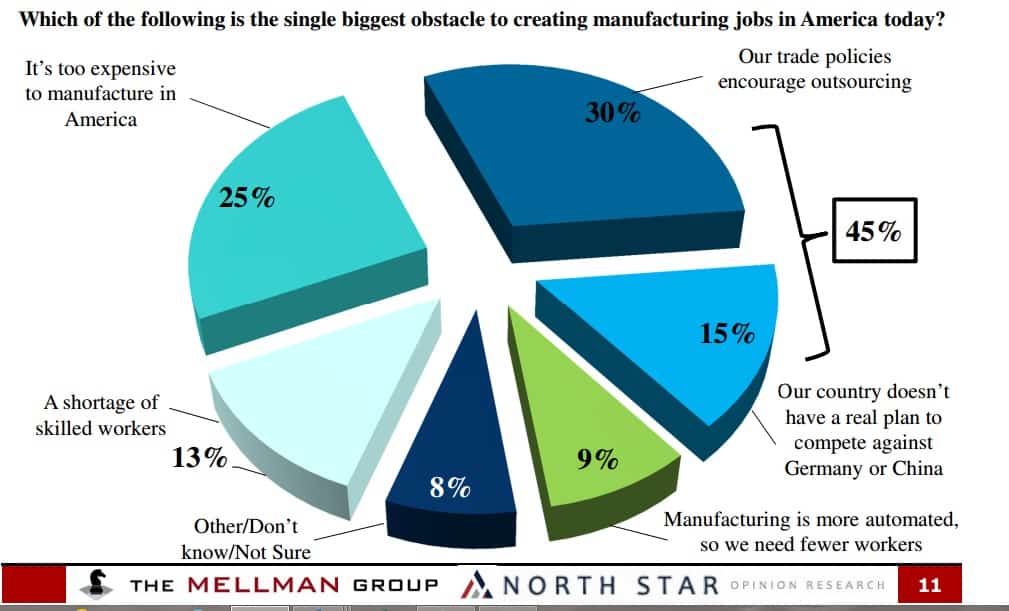 Some people say this helps the people in other countries, and that eventually they will be prosperous enough to buy from us. But this is not what has happened, as demonstrated by the fact that the trade deficit gets worse every year, not better. It has risen to the $500 billion range, representing millions of jobs.

Another effect of this is that employers can keep wages from rising, and even cut them, because so many people are looking for work. How many of us understand that employers now have the option of shipping our job out of the country to "save money?"

That wage differential has gone into a few pockets on all sides of the trade borders. Executives know they can pocket that wage differential. When they send a good-paying job to a low-paying country, that money that was paid goes somewhere. And now we see all the gains here going to a very few people – and in countries like China there are reports that the families of many of the leaders have become billionaires.

One more thing. The AAM poll shows that voters blame government policies, and say government at all levels is not doing enough to fix this.

So much for thinking that voters want government to keep out of this.