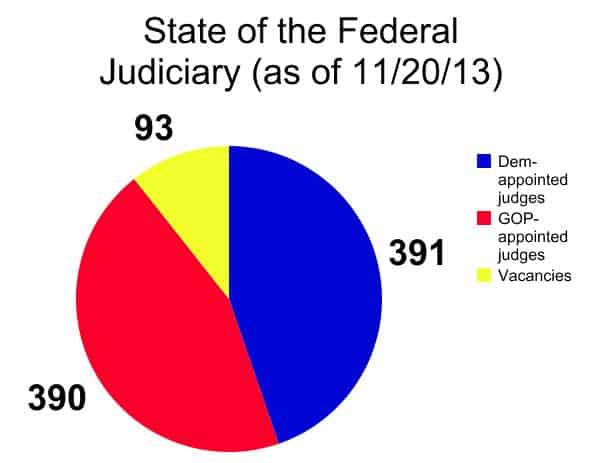 Senate Republicans have been daring Democrats to do away with the filibuster for judicial nominations. Said Sen. Chuck Grassley, "I say go ahead. There are a lot more Scalias and Thomases out there that we would love to put on the bench."

He and his fellow Republicans might want to look at the chart above before repeating that.

Despite the fact that President Obama has suffered a lower rate of judicial confirmations than his predecessors, he has still managed to win enough confirmations to restore a degree of partisan parity.

When Obama came into office, Republican appointess held 59.4% of the filled judicial seats. But just this month, Democrats took a one-seat edge and now hold 50.06% of the seats.

(The shift was little noted in the media. USA Today flagged that Democrats reached a tie on November 1. Soon after, the Senate filled two vacancies, while one new vacancy was created when a Democratic judge moved to "senior" status.)

But while Dems now hold that paper-thin edge, there are 93 vacancies on the table. (Plus another 18 judges have announced they will vacate their seats in the near future.)

If Republicans dare Democrats into scrapping the filibuster for judicial nominations, President Obama can move to fill all those vacancies, which would give Democrats control of more than 55% of the judiciary.

It's important to note that the parity Democrats have already achieved is undercut by the role of "senior" judges. As USA Today explains: "...Republican nominees will maintain an outsize influence because of the number of judges over 65 who take senior status and continue to decide cases. While the number of active judges are tied ... there are 322 senior judges nominated by Republican presidents — more than half named by Reagan — compared with 233 Democrats."

However, if Obama can seat another 93 judges on top of the 207 he has already pushed through the Senate, he'll have 300 judges in line for future senior status, the final blow against Reagan's attempt to remake the judiciary as a conservative bastion.

Sure, the day will come when there will be a Republican President and a Republican Senate. Maybe that day will be 2017. But that's far from certain. Obama would be able to make huge strides right now, if Republicans give Democrats cause to junk the judicial filibuster.

Or, Republicans could relent on Obama's right to fill vacancies and keep the filibuster in place. Obama would get some more judges, but he would not be able to fill all the outstanding vacancies by next year considering that he has only identified nominees for about half of those seats. But if Republicans provoke the end of the filibuster, then I suspect the White House can quickly find another 50 or so judges without much fuss.