The GOP’s Shutdown Tab: One Billion Dollars and Counting 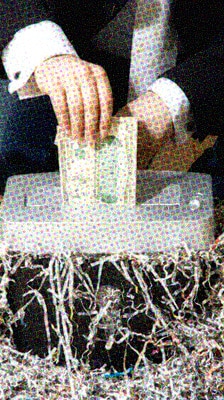 Forty million dollars an hour. A third of a billion every day. $1.6 billion every week.  That’s a conservative estimate of the money Republicans are wasting by keeping the federal government closed down.  And if pundits like Sean Hannity have their way, they’ll run up a much larger tab before this is all over.

But then, if there’s one thing Republicans know how to do, it’s run a tab.

The bill has already come to roughly $1 billion as of today (Thursday), and it grows larger every moment the government stays shut down. Republicans in Congress recently voted to cut $4 billion per year from programs that feed the needy. In two-and-a-half weeks they’ll have wasted more than that on their shutdown.

Why? "We're not going to be disrespected," said one Republican House member. "We have to get something out of this. And I don't know what that even is."

If you think that's worth billions of dollars and the paralysis of the federal government, the GOP's the party for you.

This stunt isn't just costly and wasteful. It's endangering a fragile economy, and the jobs that go with it.

And what are we getting for their billion-dollar boondoggle? Nothing.  Literally: We get nothing. The GOP’s federal shutdown is on the verge of becoming the most fiscally irresponsible gesture in modern political history.

That $1.6 billion per week figure first received widespread publicity when Morgan Stanley’s analytical team began discussing the potential cost of the shutdown, expressed in "basis points" (see notes below), in an investor newsletter this week. (A Morgan Stanley team member confirmed the number with us on Wednesday.) Other groups, including IHS Global Insight, have since offered similar estimates.

While there could very likely be additional costs to the economy, economist Dean Baker said it was difficult to estimate them in advance. “That’s where it gets speculative,” Baker told us earlier Wednesday, “because there are many possible scenarios – if, for example, a single [Food and Drug Administration] inspector misses an outbreak because he or she wasn’t on the job.”

As Think Progress and others have noted, the human costs of the shutdown will be felt immediately. The Small Business Administration has stopped issuing loans, directly hurting the kinds of businesses that create jobs. The National Institutes of Health has stopped accepting patients for experimental treatment (including terminally ill children), while other health cuts are affecting hospital care and physicians in medical school. Disaster relief in Colorado has come to a halt.

Fox News' editors and television personalities have taking to describing the shutdown as a “slimdown.” Their amusement won’t be shared by the mothers of hungry children in Arkansas, where 85,000 meals for lower-income kids will not be served as a result of the GOP’s actions.

The shutdown also incurs broader and less easily quantified costs that ripple throughout the economy.

Economist Stephen Fuller, who runs George Mason University’s Center for Regional Analysis, estimated this weekend that the Washington, D.C. metropolitan economy could lose as much as $200 million for each day the government remains closed. Since only 15 percent of Federal workers live in the D.C. area, the true cost of the shutdown nationwide (including parts of the country with lower living costs) could conceivably be $1 billion per day or more.

Even those mothers and children receiving assistance – a frequent target for the un-Christian Right – contribute to the economy. Mothers without food assistance will buy less food. The same is true of suspended food programs. The party that gives billions in agricultural subsidies to corporate farms is willing to cut into those farms' profits just to deny food to kids.

“I don't think they should give in at all,” Hannity said of House Republicans. “And if that means that they're going to sit this out for a month or two months, or however long the president wants to be arrogant and not talk to anybody, then just sit it out.”

While Hannity celebrates wastefulness, other Fox personalities have cheered cuts to Environmental Protection Agency activities which could lead to a more toxic environment. That potential cost, like the others being incurred, could eventually become very large.

These figures – $1 billion, $14 billion – are small in federal terms. But wasteful spending reflects nearly as badly on a person or a party as mean-spiritedness does. The amounts themselves are less significant than the spirit and values they reflect.

But for all the Republicans' profligacy, the billions now being wasted will seem like small change if Republicans carry out their plans to threaten the U.S. economy over the debt ceiling.  That’s exactly what House Budget Committee chairman Rep. Paul Ryan wants to do, and he’s been appointed as one of the lead negotiators.  “I like combining all of our leverage, which is sequester and the debt limit,” Ryan recently told the far-right periodical National Review.

Most observers agree that’s where the big money is, where the greatest destruction could take place.  “What I'm concerned about,” CBS News business correspondent Anthony Mason said Wednesday, “is, what's the ultimate game plan from a certain element of Republicans?”

Added Mason: “The real war is the debt ceiling ... if that comes into doubt, then you could cause chaos in financial markets around the world."

The Republicans are tampering with an extremely fragile economy, endangering a recovery that has yet to reach millions of struggling Americans. The worst time to play fiscal games is when the economy’s already in danger, and that’s exactly what Republicans are doing.

“I think (the shutdown) will fold into the debt ceiling fight,” Ryan told National Review. “I think that’s inevitable. And preferable in my opinion.”

Even if the money-wasting doesn’t disturb you, those words should.

Re the numbers: Loss estimates are based on the income of furloughed Federal employees, which has been estimated at one “basis point” of the U.S. gross domestic product (one 100th of one percent) per week. Using 2012 numbers from the International Monetary Fund, that comes to $1,623,774,600.

That means the shutdown's costing us $324,754,920 per day, based on a five-day work week. The cost per hour, based on an eight-hour work day, is therefore $40,954,365. A month's losses are calculated by multiplying the weekly figure by 4.3, the number of weeks in an average month.