Some Republicans now think it's a "moral hazard" to feed the poor. It's bad enough that Republicans are proposing $40 billion in cuts to food stamps, but portray it as a moral act beggars belief.

Earlier this summer, Rep. Steve Fincher (R-Tenn.) quoted the Bible to justify cutting food stamps during a hearing on the farm bill, even though he's one of the biggest recipients of farm subsidies. Rep. Mike Conaway (R-Texas), at a town meeting in June, supported the House GOP's cuts to food stamps, telling the audience "It's a moral hazard for able-bodied adults with no dependents to work."

The truth is that sometimes those who work still can't eat, because they're not paid a living wage. 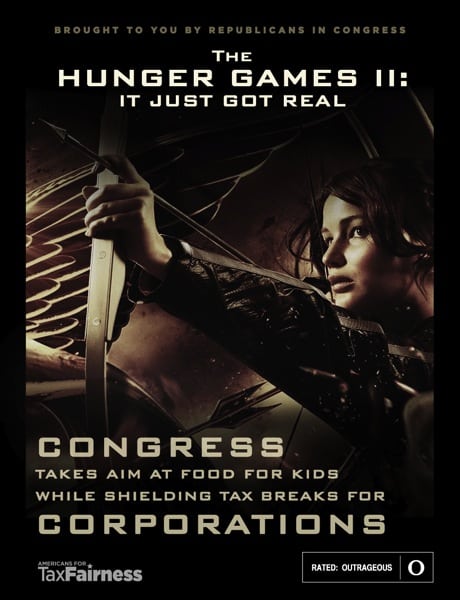 Rep. Conaway recently took it up a notch during a sugar lobby retreat at a Napa resort. He inveighed against "certain moral hazards we've built into the safety net" — like food stamps.

Conaway has recently voted to make permanent sugar subsidies that even conservative columnist George Will and the CATO Institute oppose. The government currently guarantees 85 percent of the U.S. market for U.S.-produced sugar. That means the government buys the sugar, and then sells the surplus at a loss.

The program cost to taxpayers -- who cover the government's losses on this one -- was about $80 million this year alone. About 75 percent of total farm subsidies go to biggest 10 percent of farming companies, and another $4 to $5 billion per year in direct payments goes to owners of farmland that has traditionally grown crops, even if the "farmers" in question are not growing anything at the moment. So, some direct payments go to wealthy absentee farmers, including $400,000 to a Rockefeller heir.

It ought to be enough to turn the stomach of anyone who calls themselves a "free market" or a  "fiscal" conservative. The funny part is that quite a few members of Congress are themselves farm subsidy recipients. Republicans were among the biggest recipients, raking in 10 times as much as Democratic representatives.

The absolutely hilarious part is that some of the biggest recipients of farm subsidies voted to cut food stamps and voted to keep giving subsidies to rich farmers — like themselves. Fourteen Republicans — with a total net worth of $124.5 million, including $7.2 million in farm subsidies — voted take food from the mouths of millions of the poor while continuing to  put money in their own pockets.

Scott Faber, of the Environmental Working Group, put it best: "Only an evil genius could have dreamed this up." And these people want to preach to the rest of us about morality? Republicans believe that closing billions of dollars in tax loopholes is wrong, and killing jobs by slashing government spending is right. Republicans believe that raising taxes on the wealthy is immoral, but slashing food assistance is moral.

Enough. Food stamps are not a "moral hazard." Hunger is not a game.