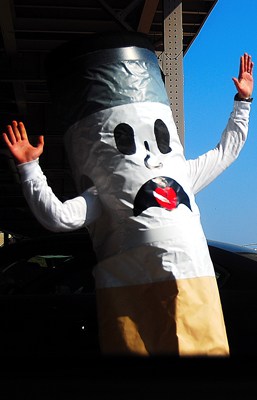 I am sounding the alarm. Right now governments and the giant multinational corporations are engaged in writing a treaty that would overrule national laws that try to rein in what these giant corporations can do to us. This treaty will allow corporations to sue governments for "lost profits" if governments try to enforce environmental, health, labor and other laws. One "smoking gun" example that shows us what this treaty is about is an argument over whether to "carve out" special treatment for tobacco because it is so harmful, or give it the same protections that other corporations and their products are due to receive.

The upcoming Trans-Pacific Partnership (TPP) "trade" deal has been called the "corporate death star." It is a NAFTA-on-steroids that goes so far beyond "trade" that it isn't really about "trade" at all. TPP is about putting corporate and investor rights above the rights of regular people.

TPP is being negotiated with a rigged process, designed from the start to end really, really well for the giant, multinational corporations and the billionaires they front for. Multinational corporations are at the table. Government representatives hoping to end up with lucrative corporate payoffs are at the table. NOT at the table: labor groups, consumer groups, health groups, environmental groups, human rights groups, civil rights groups, democracy advocates, representatives of smaller, local, not-giant-multinational businesses, potential competitors of the already-at-the-top giants, or any other "stakeholder" group that could possibly oppose the corporate agenda.

The "smoking gun" proving that TPP is about elevating corporate rights over the ability of governments to make their own laws comes from an attempt by tobacco companies to outlaw public-health anti-tobacco efforts as part of the treaty. Tobacco companies of course want the same protections other corporations and their products are receiving under this corporate-negotiated treaty.

The US government has sought to include tobacco in a regional free-trade pact, which would enable tobacco companies to use trade rules to compromise government anti-smoking regulations.

The Thanh Nien News report explains that the giant corporations understand what this is about,

The US Chamber of Commerce and its allies said they are worried by the precedent set by specifically identifying tobacco regulations as an area where governments can take necessary measure to protect public health, Reuters news agency reported.

In a letter to [US Trade Representative] Froman, the business group said that could encourage other governments "to propose additional product-specific references," which could be used to block a variety of US exports on health grounds.

Smoking gun: the giant corporate interests say if this treaty can "carve out" tobacco as too dangerous, this will encourage the peasants and their puny governments to fight for other rights as well.

The tobacco companies are upset that they might not get the same protections from governments that other corporations and their products are getting.

A recent NY Times editorial misses the point, The Hazard of Free-Trade Tobacco, making the case for "carving out" tobacco -- but only tobacco, concluding,

American trade officials need to toughen their stance when Trans-Pacific Partnership negotiations resume. They should be siding with the public and those concerned about public health, not the makers of products known to be lethal and highly addictive.

So the NY Times position is: OK to a treaty placing most corporate rights over governments, but tobacco, really?

Tobacco -- addictive and deadly -- is so harmful to people and so expensive to public health that this is getting public attention. But this particularly harmful example only shows how this "trade" agreement is really about preventing governments from doing something about other harmful things the corporations do to people and the environment in their never-ending quest for profit.

Tobacco companies are already suing governments that try to protect their citizens, claiming this costs them profits. Philip Morris is suing Uruguay for "excessive" regulation of tobacco, because Uruguay requires health warnings to be prominent on tobacco packaging. According to a NY Times report, "Uruguay’s gross domestic product is half the size of the company’s $66 billion in annual sales." The company is also suing Ireland and Norway, claiming that prohibitions on store displays reduce their profits.

Start Over With Citizens At The Table

Trade is by definition an uplifting, human activity. But the kind of "trade" that current agreements promote is not really trade at all, it is really about protecting the already-wealthy and powerful from actual trade and competition -- and democracy.

TPP and other "trade" negotiations are a flawed process, a set-up, with the process itself designed to deliver outcomes that elevate corporate/investor rights over the rights of people and their governments. When representatives of all stakeholders are not at the table, they are on the table being carved up and offered to the God of Corporate Profit.

We the People need to just start over with these agreements, with all stakeholders represented, using a process that is designed to elevate people and communities and democracy.

The first thing we need to do to change this process is to become aware of how TPP is going to be pushed. Corporate interests are trying to get Congress to pass something called "Fast Track" Trade Promotion Authority, which means Congress yields its Constitutional duty to carefully consider and amend "trade" treaties. If Congress passes this TPP will be pushed with a multi-million-dollar PR rush, with little chance for citizens to rally to fight it.

So contact your members of Congress and tell them you are watching, and you do not want them to yield YOUR right to a representative process that can consider and amend trade agreements.