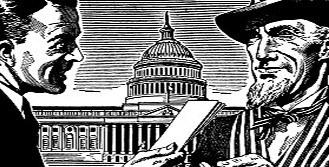 It turns out that Republican obstructionism is quite costly for big business.  A new report from the Huffington Post found that the U.S. Chamber of Commerce isn't getting much return for the $69.5 million dollars they invested in Republican candidates in the last two elections.  In fact, Republicans have blocked many of the measures that the Chamber supports, and supported many efforts that the Chamber opposed.

According to Huffington, the Chamber of Congress is urging Congress to pass comprehensive immigration reform and provide funding for infrastructure improvements, but Republicans refuse to allow either effort to move forward.  The Chamber also pushed lawmakers to oppose Obamacare, the Dodd-Frank Act, and the President's nominees for the NLRB and the CFPB, yet Republicans have gone along with nominations, and stand little chance of repealing healthcare or Wall Street reform.  The Chamber of Commerce just isn't getting much for their money.

Hard-right conservative lawmakers aren't only creating problems for their party, and for our nation – they are failing to do the bidding of their corporate masters.  In the past two election cycles, the U.S. Chamber of Congress helped get 22 House Republicans and 10 Senate Republicans elected.   However, 19 of those House members and six of those Senators aren't living up to the Chamber's expectations.  The U.S. Chamber of Commerce has not announced yet how much they will be spending in the 2014 election, but many Republicans may find themselves off of the big business donation list.  Hard-right lawmakers still have Big Oil and the Koch Brothers to fall back on, but who knows, maybe Republicans will manage to tick off those campaign contributors as well.