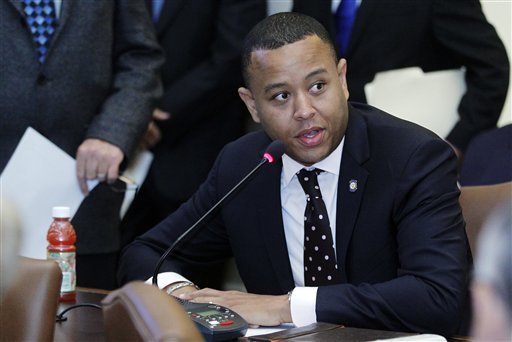 Everyone's talking about marriage this week. So it's hard to blame speaker of the Oklahoma House of Representatives T. W. Shannon for wanting to get in on the action with a bill to divert federal funds for the Temporary Assistance for Needy Families (TANF) to fund a series of public service announcements touting the benefits of marriage to single parents.

The bill passed the House and was sent to the Senate this week. The Senate sent it to the Appropriations Committee for discussion.

The bill, if it becomes law, would create a public service campaign as part of the Oklahoma Marriage Initiative and utilize federal TANF funds, to promote marriage as a tool against poverty.

TANF — Temporary Assistance for Needy Families — was designed to help low-income families on a temporary basis.

The bill would take much-needed funds from families and put it into advertising telling single parents the benefits of marriage.

Legislators are incredibly arrogant to believe they know best how people should live their lives.

Where to begin? First of all, this is what happens when the federal government gives state governments more "flexibility" by turning programs in to block grants — as Paul Ryan and the Republicans want to do with food stamps and Medicaid.

The problem is there's even less resources are available to deliver actual help to those who actually need it.

This questionable use of taxpayer money ostensibly meant for the social safety net is not unprecedented or even unique. In fact, TANF already picks up the tab for a program known as the Oklahoma Marriage Initiative – a cost of $2.8 million per year. The program was launched in 1999 when policymakers decided the state’s high level of out-of-wedlock births and divorce were causes of its high poverty rate. Since single-parent families are more likely to live in poverty, they reasoned, pro-marriage workshops would raise incomes along with marriage rates.

Of course, if the chain reaction flows the other way – couples who have financial troubles are more likely to split up, after all – then it might very well be counterproductive to skimp on benefits that would otherwise help families make ends meet. And benefits are indeed falling: Even as Oklahoma ramps up its pro-marriage programs, TANF benefits have dropped by one-third since 1996 in real terms.

The Oklahoma Marriage Initiative also suffers from a perverse redistributive effect. The programs advertised on its website are free and open to all, and engaged couples even get a big discount on their marriage license in exchange for attending. In effect, the state is siphoning welfare dollars from poor families to support relationship counseling for the general population, many of whom are surely quite well off.

Of course, as I pointed out, that's exactly how the 90's style "welfare reform" Paul Ryan and conservatives admire so much is supposed to work: this brand of "reform" doesn't reduce the need for help, it just ensures that fewer people receive help.

When conservatives start talking "welfare reform," progressives usually respond one of two ways. We either: (a) start inching towards the exits; or (b) stand in open-mouthed wonder, asking one another "Wait, they’re not serious, right?"

Oh, they’re serious, alright. In fact, that’s why we start making for the exits — because they’re serious. And none is more serious than the current poster boy for "serious" conservatives, Rep. Paul Ryan, who took to the pages of the Wall Street Journal touting his "Path to Prosperity" as an effort to build upon the welfare reform of the late 90s.

Welfare reform: This budget will build upon the historic welfare reforms of the late 1990s by converting the federal share of Medicaid spending into a block grant that lets states create a range of options and gives Medicaid patients access to better care. It proposes similar reforms to the food-stamp program, ending the flawed incentive structure that rewards states for adding to the rolls. Finally, this budget recognizes that the best welfare program is one that ends with a job — it consolidates dozens of duplicative job-training programs into more accessible, accountable career scholarships that will better serve people looking for work.

See, there’s the problem with this is that the welfare reform of the late 1990s was not a success. Not unless you’re a conservative. And even then it was at best a "catastrophic success" — defined here as "success" that’s actually catastrophic for those it’s purported to help. That’s also what makes it a success. That is, if you’re a conservative.

Besides, marriage isn't an economic cure all.

Not that it will matter to Gingrich, Santorum or many other conservatives, but a new Brookings Institute study shows that conservatives have it backwards on economic decline and declining marriage rates.

The Brookings Institute’s Hamilton Project is out with a new study showing a strong correlation between income and marriage. While marriage rates have dropped as a whole over the last few decades, there’s been much a steeper decline in marriage among low-income Americans. Michael Greenstone and Adam Looney suggest that one reason for that drop is that labor-market changes that have altered marriage prospects for those trying to make ends meet, countering conservative claims that social norms and values are responsible for the trend.

Marriage rates among lower-income men and women have declined, but Greenstone and Looney offer different explanations for each gender. Among men, they say, those “that experienced the most adverse economic changes also experienced the largest declines in marriage” between 1970s and the present day.

By contrast, women have made big gains in the labor market over the past few decades. But their greater participation in the workforce–combined with a low-income male population, increasing prison rates for men, high unemployment and diminished earning power–has also kept more women from marrying. As s result, there’s a similar, if less dramatic, correlation between income and marriage among women…

Perhaps Gwen Guthrie put it best in her 1986 single, “Ain’t Nothin’ Goin’ On But The Rent.”

The New York Times recently provided a perfect illustration of the dynamics behind the declining marriage rate in its story on Reading, Pa., the city with the highest poverty rate in the country in 2010. It featured the story of Ashley Kelleher, a waitress at an International House of Pancakes, who has been supporting her three children as well as the father of two of them.

“For the past five years, it has been me paying the bills,” she said. Kelleher said she wants to get married someday, but only to a partner who is financially stable. The man she is with now, however, is not.

Social conservatives have looked everywhere for explanations for the decline of heterosexual marriage, everywhere but the American economy. But the research on this issue clearly shows that financially insecure men are less likely to marry.

We can see the relationship between men’s earnings and marriage in the figure below. The figure shows “less money, less marriage,” to quote the authors of a recent report from Pew Social and Demographic Trends. Although the Pew research shows “no significant differences by education or income in the desire to get married,” the less money a male has, the less likely he will actually marry.

It bears out what I wrote after covering CPAC last year: A brother generally needs a paycheck before he can afford to “put a ring on it.”

At the same time, the Heritage Foundation just launched a website, FamilyFacts.Org, that touts marriage as an economic cure-all, while blaming single-parenting (single mothers in particular) and out-of-wedlock births for all manner of economic ills. I guess they live on the same planet as John Boehner.

I visited that planet last month, when I attended CPAC— a three-day conference that had nothing to say about job creation. It wasn’t on the agenda. I did sit through the “Traditional Marriage and Society” panel, which featured two African American speakers. I marveled that — given the unemployment crisis facing African American communities — this is what these two speakers came all the way to Washington to address. I wasn’t surprised, though. The right has been too successful at getting “Black People Who Should Know Better”™, to hop on that train to nowhere for too long.

Attacking my marriage won’t change the marriage rates or the employment rates — or lower poverty rates — in African American communities. None of that appears to be the point. I’d say the point is that they’re not interested in creating jobs in black communities. If they were, well… Here’s what I’d say.

A brother generally needs a paycheck before he can afford to “put a ring on it.” A 2006 poll conducted by the Washington Post, the Kaiser Family Foundation, and Harvard University found that “Black men report the same ambitions as most Americans — for career success, a loving marriage, children, respect.” But in this recession black male unemployment has reached depression era levels. Some 8% of us lost our jobs between 2007 and 2009.

You want to promote marriage in African American communities? Start with job creation.