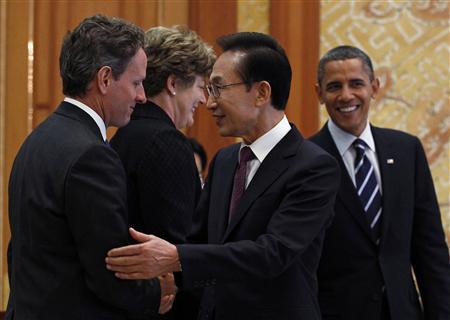 Both parties are free trade parties. The uniformity about the cost and benefits of free trade are heavily tilted towards the idea that free trade is a "net benefit" to the economy and America generally. Economists of both liberal and conservative bent have praised America's free trade regime, although global trade Nobel laureate Paul Krugman notably says free trade is mostly a wash. Politically, however, the policy of free trade has become increasingly unpopular. Support for free trade policies decline during economic downturns, but that fact makes them no less politically sensitive.

The polls on the matter indicate recent slippage in support for free trade. From an NBC pollconducted last November:

A robust plurality believe that free trade has hurt the country, while a paltry 23% agree with the reigning consensus in both parties.

Here is another poll from CNN, conducted around the same time:

"What do you think foreign trade means for America? Do you see foreign trade more as an opportunity for economic growth through increased U.S. exports or a threat to the economy from foreign imports?"Opportunity- 41%

Both parties appear to be on the wrong side of the public. There is a large block of the population that feels that free trade hurts the country and an even strong majority that feels it costs jobs. With the small number of Americans who are actually supportive of free trade being so small, it is rather interesting mystery as to how both parties have seem to come to a consensus in favor of it.

It is a funny thing too because both parties also frequently talk out of their faces about how much they cannot stand to "see our jobs shipped overseas." For Democrats, the argument is generally framed as a matter of tax policy. They say that we should give tax breaks to companies that ship jobs overseas and I agree. However, there is little evidence that ending those breaks will end the offshoring of jobs. Republicans say place the blame on unions and regulations. They say that union wages and the regulatory regime place too many onerous burdens on business, forcing them to seek refuge offshore. But this argument also seems hollow since unionization in America has declined sharply over the last 10 years. Furthermore, years of lax regulation under the Bush Administration did nothing to stop jobs from moving overseas, and neither policy had any effect on reducing America's substantial trade deficit.

It is extremely difficult to find a single policy that both parties agree support, the American public thinks is bad, and that politicians of both parties decry the effects of. Free trade is, when considered against other policies of the government, bizarre.

Perhaps this is just another issue where the influence of multinational corporate executives hold more sway over our politicians than we do. But if Democrats could begin to speak out in ways that draw a contrast with Republicans on the matter of free trade, it is quite possible Democrats could reap political benefits. It is difficult to find an issue so ripe with opportunity to get on the right side of public opinion.