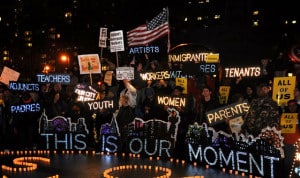 We are witnessing the beginning of a populist upheaval that will challenge business as usual from Washington to Wall Street. This moment is grounded in the reality that the economy no longer works for working people. The American middle class continues to lose ground, even as the wealthiest few capture more and more of the economic gains. Extreme and growing inequality mocks the American promise of equal opportunity for all.

The first stirrings are apparent. Occupy Wall Street exposed the 1 percent and put inequality on the national agenda. Strikes and walkouts by low-wage workers in over 150 cities dramatize the growing anger at lousy wages and benefits in the fastest growing sectors of the economy. Cities and states have moved to hike the minimum wage, mandate paid family leave and crack down on wage theft. Voters have supported hiking taxes on the wealthy to invest in schools and infrastructure.

As of yet, citizens see few vehicles for their anger. Our aim is to empower citizens and politicians to create those vehicles, and to give both definition and voice to a new populist movement that can reform our economy and our political system, so that they work for working people once more.

• The New Populism Declaration: A Movement and Agenda to Transform America’s Economy and Politics
• Memorandum: The American Majority Is A Populist Majority
• The New Populism Movement: Organizing To Take Back America

The New Populism Conference took place in Washington on May 22, 2014. The all-day event focused on strategies for educating, energizing and mobilizing around an agenda for economic change that strong majorities of Americans already support. The keynote address by Sen. Elizabeth Warren and sessions by other prominent progressive leaders critical sessions throughout the day sharpened the principles that will unite and galvanize America’s new populist majority. Watch the event on our conference page.