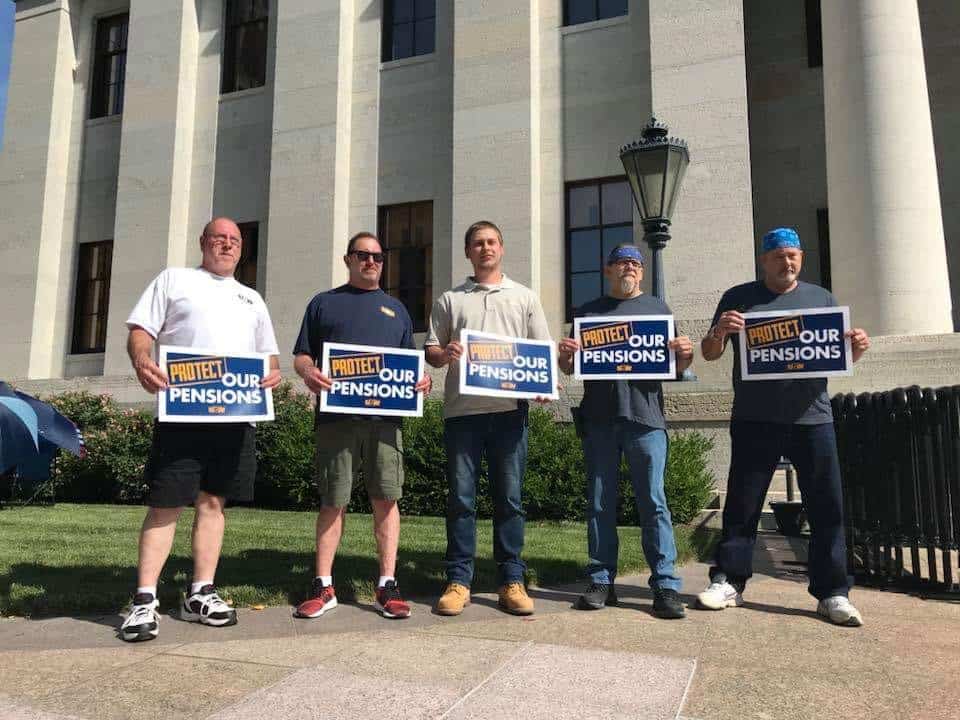 Standing out among the bald pates and grey hairs crowding into a Congressional hearing room on Thursday morning with “Protect our Pensions” stickers will be 26-year-old Ben Trusnik.

The son, grandson and great-grandson of labor union members, Ben will travel to Washington, D.C., from his home in Bedford, Ohio, to speak for the men and women he works with at Etched Metals Co. He will join other union activists in speaking for workers who are afraid that after laboring 40 or 50 years, they won’t be able to retire because the multiemployer pension plan they depended on is nearly insolvent.

He’ll be there for the guy who retired from Etched Metals a little over two years ago, whose wife has been ill for a long time. When visiting his former co-workers at the plant, this guy talks about the bills piling up from medical treatments, doctors and medications. Insurance doesn’t cover it all. “He is pretty worried,” Trusnik says, about losing his pension and with it, the ability to pay.

The PBGC is the program created by Congress in 1974 to step in when pension plans fail. Using payments from pension plans, the PBGC provides benefits to about 1.5 million people in failed multiemployer and single-employer plans. The payments pensions make to the PBGC are essentially insurance premiums. The PBGC does not receive tax dollars.

The PBGC does not pay full pensions to retirees, but something is better than zip, especially because pensions are deferred compensation. They’re earned for each hour worked. They’re not gifts like fancy engraved retirement clocks. Union workers often trade wage hikes for pension increases in contract negotiations. They sacrifice immediate gratification for the security of a good pension later. But if the PBGC’s multiemployer program fails, then the workers it covers would get virtually nothing.

When Congress created the PBGC, it made a commitment to working men and women that they would not lose their pension benefits through no fault of their own. It must stand true to that obligation now.

These multiemployer pension plans are foundering not because of something workers did or didn’t do. It’s not even because of something the employers did or didn’t do. In most cases, they were blown away by a storm of factors including globalization, manufacturing mechanization, and financial deregulation and speculation that caused the Great Recession, which, in turn, cost pension plans untold billions.

Early Thursday morning, Trusnik and two dozen fellow United Steelworkers (USW) will join other union members including Teamsters and United Mine Workers at a hearing titled “The Cost of Inaction: Why Congress Must Address the Multiemployer Pension Crisis.” It will be conducted by the House Subcommittee on Health, Education, Labor, and Pensions.

Later, Trusnik and the other labor union members will fan out across the Capitol and try to persuade their U.S. representatives and senators to support bipartisan legislation called the Butch Lewis Act, under which the federal government would provide low-interest loans to the struggling multiemployer pension plans to stabilize them and enable them to meet their obligations to workers.

“The key word is loan,” Trusnik says. “It is not a handout. We plan on paying everything back.”

The factory where Trusnik works, Etched Metals, is one of 14 Ohio companies whose workers are members of USW Local Union 1-243. Three of those companies, Etched Metals, of Solon, Ohio, and American Bronze Corp. and Rochling Glastic Composites, both of Cleveland, have workers and retirees owed benefits from a struggling multiemployer pension plan.

Trusnik serves as recording secretary for Local 1-243, and the president is Mark Minor, who works for Cleveland Hardware and Forging, one the oldest companies in Cleveland.

Minor’s pension is solvent. At 57-years-old, he is relieved by that. But he will travel to D.C. Thursday to urge action for those whose plans are threatened.

“This is money that these guys have earned, you know what I mean?” Minor says. “With my company, when I negotiate a contract, you either go for a raise in your paycheck or you go for a raise in your pension. You can’t get them both at the same time. A lot of these guys went without raises in their contract in order to up the money in the pensions.”

A pension, he says, is a pledge. “They should keep their promise. We kept our promise when it was time to do the work.” 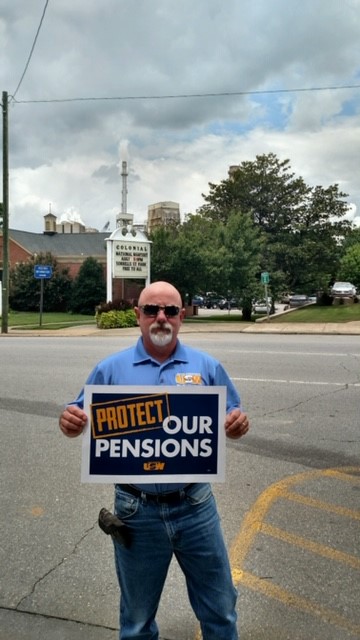 Keith Jenkins, president of USW Local 507 in Canton, N.C., a third-generation papermaker, will be at the Capitol on Thursday as well, speaking for retirees and 850 USW members who make paperboard products, including Starbucks cups, for Evergreen Packaging.

Although the company left the threatened multiemployer pension in 2014 for different retirement plans, about 500 USW members still working at the paper plant and several hundred retirees are owed pensions from the original plan. “A lot of people have a lot of time here who are depending on that,” Jenkins says.

“We paid into this. We bargained so many cents per hour per employee to be paid into it. These workers earned it,” says Jenkins, who is 57.

He knows what struck down the pension. So many paper mills have closed over the past decade that fewer and fewer workers are paying into the plan. Mills were hurt by the move to email and by massive imports of illegally subsidized paper from China. In addition, federal rules for how multiemployer pensions operate did not serve them well. Neither the workers nor the companies caused these problems. And Jenkins believes lawmakers must intervene.

“We understand why the fund is in trouble, but we would like to think that our leaders in D.C. could look at this from the standpoint of helping us out a little bit,” Jenkins says. “When you are close to retirement age, and you have worked your whole life for that benefit, you might not be able to retire with dignity if that benefit is denied.”

Like Minor and Jenkins, this won’t be the first trip to D.C. for Trusnik. In addition to serving as recording secretary for the local, he is a shop steward and Rapid Response coordinator, which is a person who rallies fellow union members to support issues that will help working people.

He believes this work is part of what he originally thought was his calling, which was to be a police officer. He saw police officers as people who helped, who solved problems for community members. And that’s what he sees himself doing now with his union activism. “When I got into Etched Metal and saw the opportunity to work with the union, I felt I could still help people in a different way. I saw it as an opportunity to help the little guy when they are treated unfairly.”

That’s why this millennia,l who started work on St. Patrick’s Day, just as his great-grandfather Wilmer Younglas did, and who lives in Younglas’ home, will join the fight for justice for pensioners in D.C. Thursday.