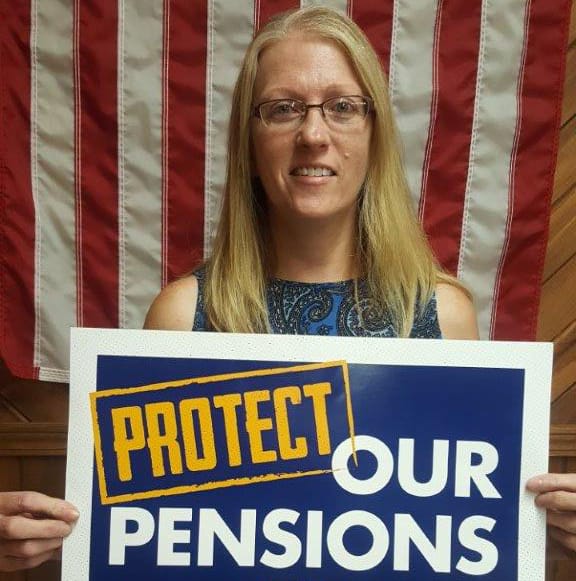 The total number of workers at risk is 1.2 million. In my union, the United Steelworkers (USW), 100,000 are threatened. Daryl A. Bugbee of Olivet, Mich., is one of them. He wrote Congress’ Joint Select Committee on Multiemployer Pensions on Aug. 8:

“I am the father of a special needs child who will always need assistance. Without my pension, I will not be able to help meet his needs.”

Workers like Daryl count on that money. Most didn’t earn enough to invest in stocks or a 401(k) for retirement. The pension was everything.

Now, they’re vulnerable because 8 percent of multiemployer pensions are collapsing. This is not the workers’ fault. Often, it’s not even the employers’ fault. It’s because of economic forces that couldn’t be predicted and Congressional decisions to deregulate Wall Street and ignore trade violations.

Now, these workers are justifiably looking to Congress for help. Daryl pleaded, “I am writing to urge you to take action needed to restore the failing pension plans.”

Congress could help. It moved in that direction by establishing the Joint Select Committee on Multiemployer Pensions. The committee set a deadline of Nov. 30 to recommend a solution. But after researching for a year and conducting five hearings, the committee appears paralyzed. That’s no help to Daryl and 1.2 million other working and retired people facing financial crisis.

“Please adopt legislation that would protect our benefits,” Daryl implored.

Legislation was introduced last year that would protect the pensions. It’s called the Butch Lewis Act. It would enable the Treasury Department to sell bonds to finance long-term low-interest loans to the troubled pension plans. That’s what Daryl and the 300 other USW members who wrote the Joint Select Committee this year want. Or something similar. They won’t nitpick. They’re scared.

Mary Collins of Kaukauna, Wis., wrote the Joint Select Committee that she’d worked for 24 years with the promise of retirement benefits from a multiemployer pension plan: “With the recent passing of my husband and the diagnosis of MS (multiple sclerosis) I feel I will have to rely on the pension upon retirement more than I had thought I would. . .I am hoping for a secure retirement option and am relying on your committee to put up a good fight for all the underdogs who have worked so hard for a lot of years.”

This is déjà vu all over again for the USW. The union, the largest in manufacturing in North America, representing workers who make steel, aluminum, tires, paper, glass, boxes, chemicals, gasoline and myriad other products including coffins, worked hard in the 1970s to ensure that pensions did not end up six feet under.

The USW pushed Congress to pass the Employee Retirement Income Security Act of 1974 under which the Pension Benefit Guaranty Corporation (PBGC) was established. The PBGC works like insurance. Pensions pay into it, and if one fails, the PBGC provides benefits to the plan’s intended recipients, often in amounts lower than those beneficiaries would otherwise have received. Still, something is better than bankruptcy.

The PBGC fund for multiemployer pension plans is not, however, exactly flush with cash. Without some action, the PBG projects the fund will run out of money by the end of 2025. It could implode sooner if many of the 115 multiemployer pension plans described as “critical and declining” fail sooner than expected. As it is, actuaries project that 107 of the plans will go bust within 20 years.

Brenda Wolfersberger, who works for a packaging plant in Fulton, N.Y., wrote the Joint Select Committee about what loss of those promised and earned pensions would mean: “Many of us need this money to make our expenses. It helps us with affording health and medications along with extras so that we may free up money to pay our other bills and to have food in our house. I am blessed to have a pension. I have seen others who don’t have one. . . I have seen many of them and the struggles they go through. . . So please help, not just for us, but for our children’s futures so they can have the things they work so hard for. I do not want them taking care of me because I could not make my ends meet.”

Brenda also talked in her letter about how this all happened: “I know I am only one of millions of people who worked long and hard all my life for the things for my future. Now, I depend on deferred wages (a pension) for my retirement security, as millions of others do. Unfortunately, because of such things as recession, trade policies, changing industries – things of which we have no control over, we are not sure of our futures.”

Brenda has it right. Many of these multiemployer pension plans were struck down by events beyond their control, events they could not have anticipated. It’s not that there’s something intrinsically bad about multiemployer plans. More than 1,400 of them are just fine. The ailing plans, however, confronted multiple crises.

The PACE Industry Union-Management Pension Fund is one of them. Jim Allen, a retired USW member from West Carrolton, Ohio, who worked for a paper-making company now called Appvion Inc., submitted testimony to the Joint Select Committee about that fund’s problems.

The U.S. paper industry has been whipsawed over the past quarter century by unfairly traded imports and the rise of electronic communications. Email, for example, reduced the need for paper. And too much of the paper that was sold came from China, where the government subsidizes the industry in ways that violate international trade laws.

As a result, paper mills across the country closed and consolidated. Over the past decade, 63,000 production and nonsupervisory paper workers lost their jobs, factoring into the 5 million U.S. manufacturing jobs that disappeared since 2000.

Now, Jim told the committee, fewer than 10,000 workers are actively paying into the pension plan, but it is responsible for payments to 25,000 retirees. And another 30,000 will be entitled to benefits, though they no longer work for one of the plan’s employers. Like nearly all pension plans, it lost value during the Great Recession, a catastrophe caused by Congress deregulating banks.

Jim urged the select committee not to cut its way out of this problem: “Every benefit cut you allow would mean less income for me to spend in my local economy. Quite frankly, a decision to cut benefits will be a decision for some retirees to cut a pill in half, a decision to pay heat or eat, and – here in Congress – a decision to not keep the promise the U.S. government made to protect our pension all those years ago.”

Loss of a pension strikes fear in the hearts of workers who shaped their lives around the covenant between them and their employer that they would receive in retirement compensation they deferred while working for decades.

Cindy McCollum of Mexico, N.Y., asked the Joint Select Committee to solve the problem, to end workers’ fears. She and her husband have worked in physically demanding jobs for the Huhtamaki food packaging company for more than 28 years. She wrote: “I have already, at the age of 48, had to have corrective surgery for issues that I feel are a direct result of standing for long hours on concrete floors and repetitive motion tasks. For these reasons, I cannot imagine being unable, financially, to retire from our current jobs at age 65, because we have lost half or more of our pension, and having to go on working in those conditions while we are aging into our 70s. We have done everything that we were supposed to do.”

In fact, the workers like Cindy covered by these pension plans worked hard and played by the rules. Similarly, their employers put up a good fight to survive, merging, cutting costs and straining to preserve pensions and jobs.

Laura Hanan, the wife of a USW member from Sussex, Wis., also wrote the Joint Select Committee about her anxiety: “I literally did not sleep last night worrying about all of the people who will not get their pensions when they retire. It does not seem fair.

“My husband has been a factory worker and in the union for 41 years. He has never missed a day of work or has been late in all of this time. I’m sure there are a lot of people with the same work ethic. And what do they receive for all this hard work?”

They receive betrayal – unless Congress acts.