Getting Granular on America’s Income Distribution

Back in the 1980s, the decade that saw researchers start detailing America’s increasing concentration of income and wealth, flacks for the emerging Reagan economic order disdainfully dismissed the significance of the alarming new data.

Over on Capitol Hill, researchers at the Congressional Budget Office would eventually put that conservative case to the test. They started producing periodic reports that took all sources of income into account, everything from wages and salaries to food stamps and unemployment benefits — and then totaled up all these numbers, by income level, before and after taxes.

What did the CBO’s statistical sleuths end up finding? Plenty of growing inequality.

The Congressional Budget Office has just released the latest iteration of its U.S. household income distribution series, and this new research rates as the nonpartisan agency’s most comprehensive yet. The freshly crunched numbers explore the income distribution story in 2014, the most recent year with complete statistics available, and then trace that story back 35 years to 1979, the year before Ronald Reagan won the White House.

In 2014, Barack Obama sat in the White House. By that year, the Affordable Care Act — legislation that both increased health benefits for lower-income Americans and increased federal taxes on higher-income Americans — had gone almost fully into effect. But those changes, the new CBO report shows, didn’t turn out to be enough to reverse rising inequality.

How much more significantly? After totaling all varieties of income and government benefits — and subtracting out federal taxes — the CBO researchers found that poorest 20 percent of U.S. households averaged $31,100 in 2014. Households in the top 1 percent of the nation’s 2014 income distribution averaged $1,178,600.

This gap would have been considerably wider without the government benefits the CBO labels “means-tested transfers,” the cash and in-kind services lower-income households receive from programs like Medicaid. In 2014, these programs increased the incomes of the poorest fifth of American households by an average 64 percent.

A sign of egalitarian progress worth applauding? Most certainly. But that progress, after only a year-plus of the Trump administration, has faded. Tax rates on our richest have sunk, as has budget support for basic social benefits.

But in 2014, even with that progress, the divide between America’s rich and everyone else was still widening, continuing the income tilt to the top that the new CBO report tracks back to 1979.

Between 1979 and 2014, after figuring in all taxes and social program transfers, the after-tax incomes of America’s top 1 percent rose over three times faster than average incomes in the bottom 20 percent — and over six times faster than incomes in America’s statistical middle class, those households in the exact middle 20 percent of the nation’s income distribution.

Middle- and low-income Americans have paid a heavy price for those few extra dollars per week. Their schools have become more overcrowded, their streets more potholed, and their college costs much more expensive as tax giveaways to the rich and powerful shrink the budgets for basic public services.

Average Americans have a right to be upset. Wealthy Americans like Donald Trump have no right to exploit their anger. 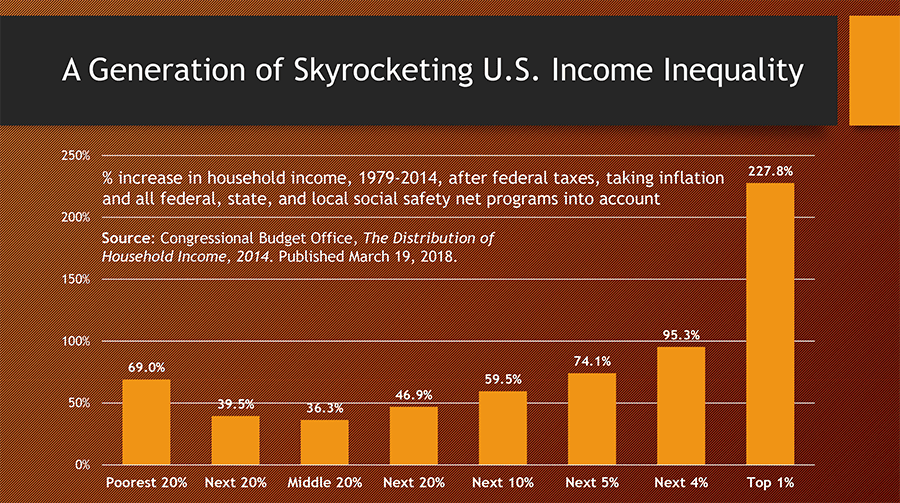 Sam Pizzigati co-edits Inequality.org. Among his books on maldistributed income and wealth: The Rich Don’t Always Win: The Forgotten Triumph over Plutocracy that Created the American Middle Class, 1900-1970. His latest book, The Case for a Maximum Wage, will appear this spring. Follow him at @Too_Much_Online.