Another GOP Tax Plan for Captains of Industry

As he ran for office, Donald Trump repeatedly reminded audiences that he was “really, really rich,” but assured voters that as president he would be a working man’s champion, a blue-collar Superman. 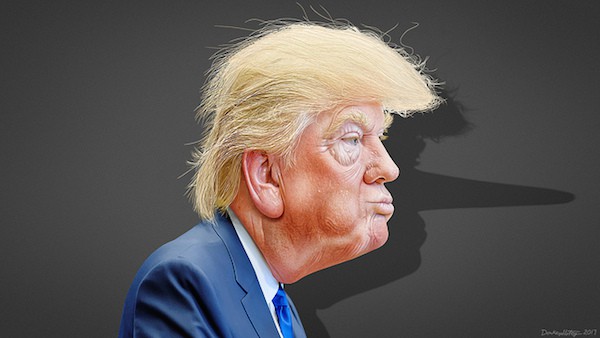 He said he would stop corporations from offshoring manufacturing jobs with a border adjustment tax on imports. He would end trade cheating and declare China a currency manipulator on his first day in office. He would launch within his first 100 days a $1 trillion infrastructure improvement program to create millions of jobs fixing the nation’s airports, bridges and roads.

Trump’s record of promise-keeping to America’s working men and women in his first 100 days is this: So far, no good. The tax plan, well, the one-page tax sketch that the administration released last week is symbolic. While it would slash federal levies on fat cats and corporations, administration officials refused to say it would help the middle class at all. And it contains no border adjustment tax.

The tax plan rewards the captains of industry, the captains of Wall Street, the captains of real estate, like, well, like Trump himself. But the middle class, not so fast. The poor, not at all. Someone needs to tell Donald Trump that banksters and real estate tycoons sporting navy golf polos aren’t blue-collar workers. The tax scheme, like so many of Trump’s other pledges to workers, is a stab in the back of that indigo shirt.

On the campaign trail, Trump said rich people like him should pay more in taxes. Yet, the tax plan he offered last week would cut his taxes – by tens of millions a year. That’s because it would eliminate the alternative minimum tax. This is a levy intended to require billionaires like Trump to pay at least something after subtracting their multitude of special-rich-people deductions.

Trump has refused to release his tax returns – the first American president to keep them secret since Gerald Ford, who provided summaries. But Trump’s 2005 return, uncovered in part by a newspaper, shows that he had to pay $31 million as a result of the alternative minimum tax.

Trump’s plan also calls for eliminating the estate tax. That is paid only by people who inherit more than $5.5 million – as Trump’s children will. And it calls for cutting by more than half, to 15 percent, the tax paid by entities called pass-through corporations. Trump’s attorneys indicated in his presidential financial disclosures that his approximately 500 businesses are almost all pass-throughs.

Trump will be hobnobbing with his country club buddies in benefitting from this break. A 2015 study by the nonpartisan National Bureau of Economic Research found that the top 1 percent gets 69 percent of pass-through income.

Right now, a worker can’t get in on that low 15 percent tax rate unless reporting income below $37,950. But doctors and lawyers and investment bankers would get that special discount rate, no matter how much they make, as long as they pay a few bucks to establish a pass-through corporation. Trump’s plan would allow a lawyer paid $1 million a year to cut his taxes by $180,000 by setting up a pass-through.

Certainly, with all of those perks going to the nation’s most wealthy, Trump’s tax men would assure workers that they will benefit too.

Not really. When asked on ABC’s “Good Morning America” last week whether the middle class would pay more under the plan, Treasury Secretary Steven Mnuchin said: “I can’t make any guarantees.”

And the director of Trump’s National Economic Council, Gary D. Cohn, could not say how much of a break – if any­ – a middle-income American would get under the plan.

If it’s not absolutely clear who Trump’s tax plan would benefit, there’s also this from George Callas, the senior tax counsel for the Speaker of the House. Callas wants a permanent break for corporations, saying of a temporary one:

“It would not alter business decisions. It would not cause anyone to build a factory. It would just be dropping cash out of helicopters on corporate headquarters for a couple of years.”

Lots of small towns in Ohio, Michigan and Pennsylvania – towns that suffered when corporations offshored factories, towns that voted for Trump – would really benefit from cash dropping out of helicopters for a couple of years.

But that’s not Trump’s plan.

Trump’s money men, Mnuchin and Cohn, said slashing levies on the wealthy will pay for itself because giving the rich more cash will spur economic growth. So, no need to worry about Trump’s tax cuts ballooning the national debt, they assured.

This is called the Laffer Curve. Really.

Economist Arthur Laffer, an adviser to Trump, explained to the Washington Post last week that it works like this: “When you think about cutting that corporate rate, let’s say, from 35 to 15, that’s not going to cost you any money.”

He convinced the likes of Ronald Reagan and George W. Bush this hocus-pocus would work. And now, he has bamboozled Trump.

The Committee for a Responsible Federal Budget, a nonpartisan group that advocates fiscal restraint, estimated that Trump’s Laffer tax plan could reduce federal revenue by $3 trillion to $7 trillion over a decade. The economy would need to grow at a rate of 4.5 percent to make that proposal self-financing.

It grew at a pathetic 0.7 percent during Trump’s first quarter in office. In President Obama’s last quarter, the fourth of 2016, it increased at 2.1 percent. To rise at 4.5 percent would be phenomenal. Maybe paranormal.

Maya MacGuineas, president of the Committee for a Responsible Federal Budget, put it this way: “It seems the administration is using economic growth like magic beans: the cheap solution to all our problems.”

Ronald Reagan, who like Trump was adored by blue-collar workers, promised that benefits from his massive tax cuts for the rich would trickle down to the rest. That never worked. But now Trump is taking advice from the same Svengali and promoting the same flim-flam plan.

Those heartland workers can’t tolerate another hit. But it’s not just taxes. The health insurance proposal Trump is pushing would cost many low- and middle-income workers thousands of dollars more a year. Trump has proposed eliminating the Chemical Safety Board, which prevents workplace deaths. He delayed rules protecting workers from deadly silica and beryllium. He signed a law ending a requirement that large federal contractors disclose and correct serious safety violations. Trump has no federal infrastructure plan and reneged on naming China a currency manipulator.

These are all the actions of a president protecting the captains of commerce, not one championing blue-collar workers.

Leo Gerard is president of the United Steelworkers