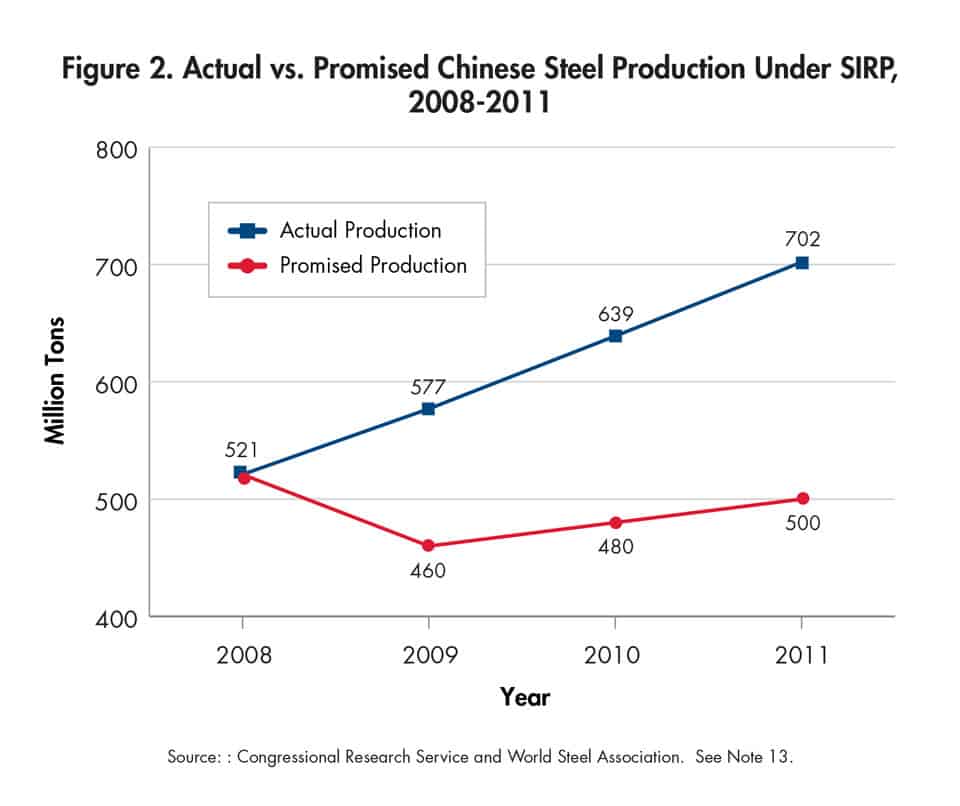 American steel is made in the most efficient, cost-effective mills in the world by the most skilled, productive workers anywhere. That's a fact. It's a fact that steel executives testified to last week in hearings conducted by members of Congress and trade law enforcers. We want the trade enforcers and Congress to stop the dumping and to force China to dramatically cut its steel production because China has kept none of its promises over the past seven years to voluntarily do so. In fact, it has continuously increased production.

China makes way, way too much steel. In 2015, it produced 100 million tons more than it needed. It did that to keep its citizens employed, its mills running and its country free of civic unrest.

That would be fine if China just put all of that extra steel in a warehouse somewhere. But it dumped that 100 million tons in overseas markets in 2015. Production of that steel was subsidized by the Chinese government in ways that violate international trade rules, so the price was artificially low. And China suppresses the value of its currency, further falsely reducing the cost of the steel.

Even the most efficient mills in the world can't compete with a country. So they shut down.

On Tuesday, Sam Pantello, a maintenance mechanical technician at EVRAZ Rocky Mountain Steel in Pueblo, Colo., told the U.S. Trade Representative that 260 of his fellow workers are laid off and EVRAZ is running at 65 percent capacity all because of Chinese dumping. Here is what he said:

"We produce high-quality steel cost-effectively and efficiently and are the only manufacturer of steel rail west of the Mississippi. And yet, because of steel dumping, I have co-workers out of a job, worrying about making their next mortgage or car payment, and that just isn't right."

This didn't happen overnight. China has been ramping up production of steel and aluminum and other commodities for over a decade. It ships the excess overseas. That floods international markets, artificially depressing prices worldwide. That bankrupts factories and mills that operate on Western free market principles, causing unemployment and shattering communities. The devastation has occurred across the United States, Great Britain and Europe.

Everyone is affected, from the guy who digs the iron ore out of the ground to the guy who sells burgers to workers leaving the mill on shift change. Dan Pierce, a diesel mechanic at the U.S. Steel Keewatin Taconite mine in Hibbing, Minn., explained this to the U.S. Trade Representative. Because so many steel mills are partly or completely shut down, the demand for taconite, which is processed into iron ore pellets, is slim. U.S. Steel closed the Keewatin Taconite mine last May and laid off nearly all of the 360 workers, including Pierce.

"Not being able to work for the past 11 months has put stress on me, my family and my friends as we wrestle with the uncertainty of if, and when, I will be able to return to work. Our family has had to hold off on home repairs and cut back on groceries and eating out. When we do this, and you multiply it by all of the other workers going through the same things, it means local businesses suffer as people make fewer trips to places like the Super One Foods or the Erikson lumberyard. Everything in the [iron] range depends on the mining companies running. When they're shut down, it affects everyone, from daycare providers to local car dealerships to hospitals," Pierce explained.

The effect of China dumping its excessive production into the world market is massive layoffs, both in the United States and in Europe. Last week Britain demanded that China rein in its overcapacity after Tata Steel announced it was placing its partly closed British mills on the auction block, putting 15,000 jobs at risk.

In the United States, 13,500 steelworkers hold layoff notices, and earlier this month, 750 U.S. Steel white-collar workers learned they'd lose their jobs too. The crisis has hit aluminum just as hard. Five years ago, 14 aluminum smelters ran in this country. Now there are five. Another is slated to close in June. If it does, 6,500 aluminum workers will have lost their jobs. These are good, family-supporting jobs with benefits and pensions. This is China exporting unemployment.

Tim Davis, a crane operator at Cascade Steel Rolling Mills in McMinnville, Ore., told the U.S. Trade Representative what it means to lose that kind of job. His mill makes rebar, coiled steel wire and flat bar. Because of dumped coiled wire and rebar, Cascade is running on reduced days and furloughed 70 workers, including Davis.

"Cascade Steel isn't just a job to me. It helped raise me. The paychecks my dad received from working there when I was growing up allowed me to participate in sports while I was in school, paid for our family vacations and ensured that I had a roof over my head and food on the table. I want that for my family. I want to know that as long as I work hard to provide for my family that they can have the same childhood I did thanks to my dad working hard at Cascade Steel.

"I am proud to follow in my father's footsteps in the manufacturing industry, and I would hope that my children would be proud to follow us if that is what they choose to do, but for that to happen, there needs to be an American manufacturing industry around for them to do so, and at the current rate of American factories closing their doors for good, I'm concerned they won't have that option.

"At this pace, the only option my kids will have is college, the military or working at a retail store that was built with foreign materials, selling foreign-made products, and then bagging purchases up in foreign-made bags," he told the Trade Representative.

Since 2009, China has repeatedly acknowledged that it makes too much steel and promised to stop. But it doesn't. It just makes even more. Even at a loss.

Again in January, China said it would cut production, this time by 100 million tons by 2020. That is not nearly enough and not fast enough. But then just last month, China’s Baosteel, a major state-owned company, announced that it would increase production by 20 percent this year.

China's capacity now exceeds that of the United States, Japan, the European Union, and Russia combined. That means every mill in the United States, Japan, Russia and the European Union could shut down, all of those workers could lose their jobs, all of those communities could crumble and China would reap the benefits by exporting all of its steel and further expanding its industry.

If those countries rolled over and let China do that.

David Clark, a maintenance utility worker at the U.S. Steel Fairfield Tubular Operations in Alabama, previewed for the U.S. Trade Representative what such a China takeover could mean. Much of the Fairfield works shut down in August, and 1,000 steelworkers were laid off. The local union has set up a food bank to help families get by. "My community is struggling," he told the trade officials.

"The outlook is bleak for the business in our town. All of the suppliers in the area have been forced to cut positions. Some local gas stations have ceased 24-hour operations as the traffic at shift changes went away. And retailers are leaving the city. Shortly after the closure, Walmart and other retailers left the city of Fairfield, and the loss of sales tax revenue has placed the city in dire financial situations. It has gotten to the point where the city council in Fairfield is debating closure of the police department and the suspension of other city services in order to survive."

Clark said what every steelworker told the trade officials and what we all told Congress: "No U.S. steelworker should have to lose a job to allow unfairly traded steel into this country."

The corporate officials asked the U.S. Trade Representative and Congress to act to save an industry vital to national security. I told the same officials to stop swallowing false promises of change from China and impose broad-based import restraints, take comprehensive, enforceable measures to reduce global overcapacity and definitively declare that China does not qualify as a market economy under U.S. law.

Davis, the laid-off crane operator from Oregon, talked about government's failure to act in a way that Americans who care deeply about their country can really understand:

"I implore this committee to consider the true cost of allowing terrible policies and bad trade agreements to continue destroying the very thing that made this country what it is. We became the strongest, most powerful country in the world because American blue-collar workers carried us there on their backs on their quest to achieve the American Dream. Each and every unfair trade deal we jump into is destroying the legacy that our forefathers created with sweat on their brow and calluses on their hands."

This post has been updated to correct the amount of steel overproduction in China.