Wingnut Year In Review: Just In Time For The Holidays

Are you dreading another holiday dinner with a talkative right-wing relative or two? Here’s a year’s worth of wingnuttia to shut them up.

As the holiday’s approach and the year winds to a close, many of us are headed for holiday dinners with a few right-leaning family members who can’t pass the mashed potatoes without parroting some right-wing rhetoric. If you’re already getting heartburn from the thought of another holiday dinner served with a a side of right-wing rhetoric, fear not. As Republican primary years usually do, this year turned out to have a deep, rich vein of wingnuttia. We’ve spent a year mining it.

What follows are the biggest, foulest nuggets of wingnuttia we’ve dug up in the past year. Drop a few into the holiday dinner conversation, and your wingnut relatives will either choke trying to swallow/defend them, or fall silent because they can’t actually stomach this stuff much better than you or I can. Either way, your holiday dinner will be a bit more fun, or a whole lot quieter.

“No Go Zone” On The Brain

In January, we learned that the biggest “No go zones,” are the one’s between wingnuts’ ears. Fox News terrorism “expert” Steven Emerson declared Birmingham, England, a “totally Muslim” “no-go zone.” The “no-go zones” myth bubbled up from the outer fringes of the of America’s wingnut fever swamps eight years ago and finally seeped into mainstream conservatism.

Prime Minister David Cameron called Emerson an idiot. “Le Petit Journal” found multiple instances of Fox News employees repeating the “no-go zones” claim, and had fun sending reporters to mythical “no go zones.” The mayor Paris threatened to sue Fox News for its reporting on the city’s mythical “no-go zones.” That was finally enough to get an apology from Fox News.

No Vaccine For Stupid

It started with New Jersey governor Chris Christie. Asked about a recent measles outbreak during a trip to London, Christie responded by backing parents who choose not to vaccinate their children. That led to an outbreak of anti-science conservatism.

Conservatives apparently don’t understand herd immunity, but they’ve got herd mentality down. Too bad there’s no vaccine for stupid.

What’s The Matter With Texas?

Apparently, they grow everything bigger in Texas, including paranoid wingnut fantasies about government conspiracies. Deep in the dark heart of Texas, those fantasies have grown big enough to generate events that seem to justify them; so big that they’ve metastasized to afflict elected officials. None grew bigger, or spread faster than Jade Helm.

Jade Helm 15 was the name of a military exercise that took place in multiple states — including Texas, Arizona, Florida, Louisiana, and Mississippi — over the summer. Right-wing conspiracy theory websites picked picked it up and spread panic that the whole thing was an elaborate psy-ops to get people used to seeing the military in the streets, to prepare them for invasion, the imposition of martial law, and confiscation of fire arms.

The whole thing moved from the fringe to mainstream conservatism almost overnight. Texas governor Greg Abbott ordered the Texas National Guard to monitor the situation. Rep. Louie Gohmert (R, Texas) promoted the conspiracy theory, releasing a statement that people were “legitimately suspicious” because of how “true patriots” and Christians were being persecuted. Former Texas governor and presidential candidate Rick Perry assured Americans that no one would ever have to worry about “President Perry” invading Texas. At one point, nearly one-third of Republicans and half of tea party supporters feared the federal government was trying to “take over” Texas.

The whole thing ended with no “takeover,” and the only people arrested were three wingnuts who were accused of stockpiling guns and ammunition, making pipe bombs, and plotting against the government in response to Jade Helm, and one guy taken into custody after shots were fired at a Jade Helm training site. But no one ever explained how the US government could possibly “invade” a US state. That would be like you “invading” a room in your own house. 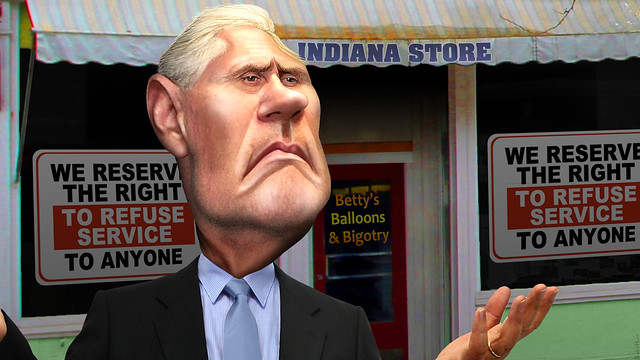 In April, the Indiana state legislature passed a “religious freedom” bill. Governor Mike Pence (R) signed it into law. Then all hell broke loose. A #boycottindiana movement sprang up almost overnight on social media. Almost immediately, the law cost Indiana $40 million, when the CEO of Angie’s List nixed plans to build its headquarters in the state. Ultimately, the law could have cost Indiana about $256 million in business lost because of boycotts.

Governor Mike Pence was clueless about the reasons for the backlash, and doubled down on the law. Pence declared that Indiana’s new law would not be changed. At least not until Pence called on the legislature to “fix” a law he said didn’t need fixing. Pence eventually signed an altered bill that prohibited anti-LGBT discrimination that might have resulted from the original law.

And we have Mike Pence to thank for Kim Davis. ’Nuff said.

Call It What It Is, Or Be Complicit In June, 21 year-old white supremacist went to Charleston, South Carolina’s history Emanuel African Methodist Episcopal Church. He was taken to meet the pastor, Rev. Clementa Pinckney. Pinckney had Roof sit next to him, as an honored guest during the bible study. Roof spent an hour with Pinckney and eight other parishioners. Then he rose and said, “You all rape women and you’re taking over our country,” adding, “I have to do what I have to do.” Despite one attempt to talk him out of killing anyone, Roof opened fire, killing nine people, stopping to reload his gun five times. He left two survivors behind, to tell what happened.

Roof intended to kill himself, and leave behind a rambling racist manifesto to explain why he “had no choice”. The manifesto was accompanied by photos of Roof alternately brandishing a gun and a confederate flag, stepping on an American flag, visiting old plantation houses. In some of the photos Roof wore a jacket displaying the flags of the white supremacist African state of Rhodesia and apartheid-era South African.

What did wingnuts have to say? The cast of “Fox & Friends” tied themselves in knots trying to spin the shooting as an “attack on faith.” Charleston police had already declared the shooting, and a survivor told a reporter what Roof said before he started shooting.

So why would right-wingers go to such lengths to deny that race had anything to do with it? Maybe because Roof was radicalized by the Council of Conservatives Citizens, which the Southern Poverty Law Center calls “the modern reincarnation of the old White Citizens Councils.” The CCC has a long association with the GOP, and has contributed to many Republican campaigns.

In the spring, scandal brought down not one but a whole family of right-wing superstars. TLC’s “Nineteen Kids and Counting,” made the Duggar family famous for both their fecundity and their fundamentalist faith. It’s also made big brother Josh Duggar a political player in Washington. The eldest of the Duggar brood, Josh went from selling used cars to serving as the executive director of the Family Research Council’s lobbying arm, FRC Action.

Duggar used his celebrity status to champion conservative causes and candidates. He joined forces with mom, Michelle Duggar, in supporting the repeal a local nondiscrimination ordinance in Fayetteville, Arkansas. The campaign included robocalls in which Michelle claimed the nondiscrimination ordinance would cause “males with past child predator convictions that claim they are female to have a legal right to enter private areas that are reserved for women and girls.”

So, the revelation that Josh Duggar had molested several young girls — including some of his sisters — and the Bob and Michelle Duggar did everything they could to cover it up, it was major news. It got even better when data released online after Ashley Madison, a website created to help people cheat on their spouses, revealed that Duggar had a paid account, complete with an “affair guarantee.”

We should have known. A presidential campaign that began with an absurd ride down an escalator has been downhill ever since. Donald Trump’s candidacy started out as a joke in most people’s eyes. Now, it threatens to make a joke of our democracy.

According to a recent Quinnipiac poll, 50 percent of Americans would be mortified if Trump became president. Frankly, that number should be a lot higher, but it’s no wonder it’s that high, considering that Trump has shown himself to be the most misogynist, xenophobic, racist presidential candidate. And what he inspires in his supporters. Latino and African-American protesters have been pushed, punched, kicked and spat on.Trump’s rallies are just a few white sheets short of a lynch mob. In fact, at Trump’s last rally Trump supporters chanted “Sieg heil,” and wanted to set a black man on fire.

And this guy is the GOP’s front runner.