Ten years later, the federal government’s response to Hurricane Katrina is a heartrending example of the consequences and human cost of conservative failure.

Ten years after the poorest and most vulnerable in the areas hit by Hurricane Katrina were left to fend for themselves, the George W. Bush administration’s response to the natural disaster stands as the archetypical conservative failure. The city of New Orleans became a crucible of suffering, and a searing example of the flesh and blood consequences people who disdain government gaining control of government, and ensuring that government cannot function when it is most needed. After being hit by Katrina, New Orleans was hit by conservative ideology designed to leave it and its poorest, most vulnerable citizens in ruins. 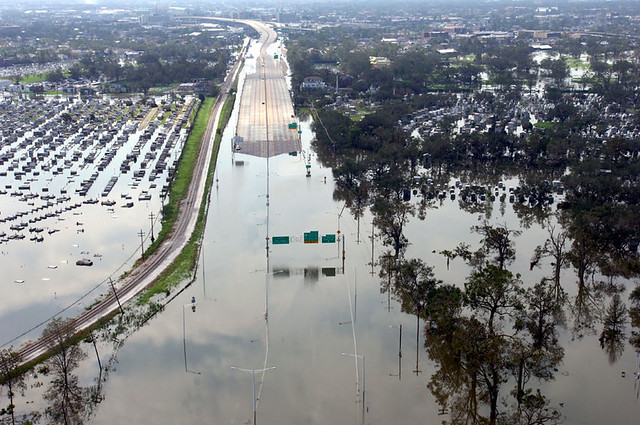 "New Orleans, La. August 29, 2005 -- Aerial of a flooded neighborhood. New Orleans is being evacuated as a result of floods from hurricane Katrina. Thousand of people have been rescued from the flood waters by moving to their roofs and attics."

Katrina represents both conservatism’s most devastating failure and its most catastrophic success. Conservatism promises small government, widespread prosperity, irreproachable morality, increased liberty and security. Conservatism fails to fulfill these promises, because it cannot. Nor does it intend to. Even now, some conservatives cheer Katrina and its aftermath as a catastrophic success to be exploited as an opportunity to implement conservative policies. Even as thousands suffered the consequences of a failed government response in the aftermath of Katrina, now former Rep. Richard Baker (R, Louisiana) was overheard telling lobbyists, “We finally cleaned out public housing in New Orleans. We couldn’t do it, but God did.” 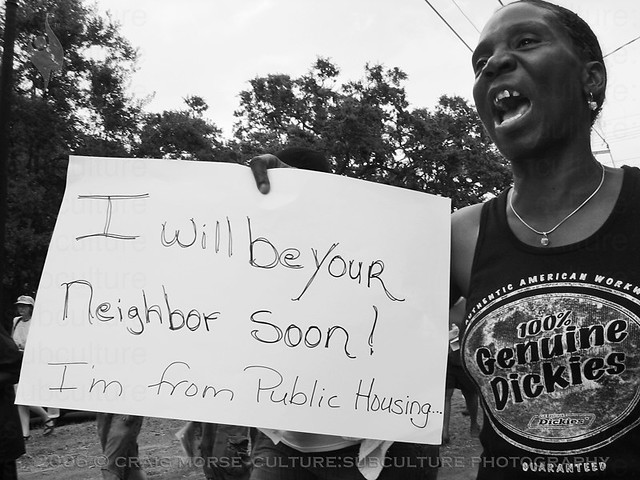 Thousands of low-income, working-class, African American families have been in favor of developers' desire to cash in on the tragedy following Hurricane Katrina through building mixed-income housing. Mixed-income housing is open to only 10% of lower income families, leaving many without a home.

Ten years later, Chicago Tribune conservative columnist Kristen McQueary was almost gleeful about Katrina and the impact of the failed federal response. McQueary wrote that she is “envious,” because “Hurricane Katrina gave a great American city a rebirth.” The devastating losses suffered by most poor people or color in the Gulf region were just “what it took to hit the reset button in New Orleans.” McQueary openly wishes for “an unpredictable, haughty, devastating swirl of fury” to hit Chicago, creating an opportunity to accomplish a number of conservative agenda items: slashing the city budget, forcing unpaid furloughs and trashing labor contracts. Never mind that thousands will have to die, and hundreds of thousands be displaced, to make it happen.

McQueary has been excoriated on Twitter, but her remarks merely reflect the conservative ideology that led to the federal government’s abandonment of Katrina’s poorest, most vulnerable victims. When conservatives slash government budgets, whether municipal or federal, programs that serve low-income Americans are usually subject to the deepest cuts.

The Federal Emergency Management Agency (FEMA) is a prime example. Long before Katrina was even a tropical depression, conservative disdain for government led to the defunding and mismanagement of the Federal Emergency Management Agency (FEMA). As FEMA shrunk, its ability to help those in need during national emergencies and natural disasters shrank with it.

By 2001, FEMA had been captured by conservative ideologues. George W. Bush’s first FEMA director Joseph Allbaugh told a Senate appropriations subcommittee, “Many are concerned that federal disaster assistance may have evolved into both an oversized entitlement program and a disincentive to effective state and local risk management.” The agency was downgraded from cabinet level and subsumed by the Department of Homeland Security. In 2005 came the death blow, when it was announced that FEMA would “officially” lose its disaster relief function. Conservatives still have FEMA marked for extinction; 2012 Republican presidential nominee Mitt Romney told CNN’s John King that he would effectively gut FEMA and “give it back to the states.” 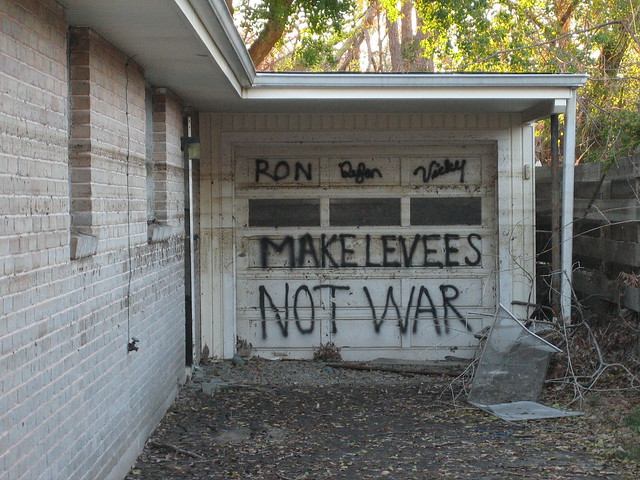 New Orleans after the Hurricane Katrina levee failure disaster of 2005: Inscription on garage of formerly flooded house. Filmore neighborhood, 7th Ward, a couple blocks from the uptown side breech of the London Avenue Canal floodwall.

And if the poor suffer as a result of conservative policies? So what. Even as images of the human suffering in New Orleans caused outrage around the world, conservative pundits declared it was no more than what the poor, largely black and brown, people left behind in the city deserved.

O’Reilly and Will were responding to Obama’s effective critique of the conservative worldview, which he repeated at the 2006 Take Back America conference:

The reason they don’t believe government has a role in solving national problems is because they think government is the problem. That we’re better off if we dismantle it - if we divvy it up into individual tax breaks, hand ’em out, and encourage everyone to go buy your own health care, your own retirement security, your own child care, their own schools, your own private security force, your own roads, their own levees…

It’s called the Ownership Society in Washington. But in our past there has been another term for it - Social Darwinism - every man or women for him or herself.

It allows us to say to those whose health care or tuition may rise faster than they can afford - life isn’t fair. It allows us to say to the child who didn’t have the foresight to choose the right parents or be born in the right suburb - pick yourself up by your bootstraps. It lets us say to the guy who worked twenty or thirty years in the factory and then watched his plant move out to Mexico or China - we’re sorry, but you’re on your own.

It’s a bracing idea. It’s a tempting idea. And it’s the easiest thing in the world.

But there’s just one problem. It doesn’t work. It ignores our history. Yes, our greatness as a nation has depended on individual initiative, on a belief in the free market. But it has also depended on our sense of mutual regard for each other, of mutual responsibility. The idea that everybody has a stake in the country, that we’re all in it together and everybody’s got a shot at opportunity.

The levees weren’t the only thing that failed in New Orleans ten years ago. Conservatism failed the city’s poorest, most vulnerable citizens in their darkest hours. The difference is that nobody planned for the levees to fail. They weren’t intentionally designed to fail, the way that conservatism seems to be.