When Republicans finally choose their nominee for president, he or she will be already bought and paid for by one or more of the GOP sugar daddies of the 2016 election.

Never before have so many with little chance of — and even less interest in — being president, declared themselves candidates for the job. In a field of 15 candidates, it’s a given that most of the GOP hopefuls haven’t a prayer of even making the short list of potential nominees. It’s a safe bet that most of them know this.

So, why are they running? For some Republicans, it’s a no-brainer, because they win even if they lose. Running for president, or even having second billing on a losing ticket, can make one rich, famous, and influential. Mike Huckabee’s failed 2008 bid helped him get a Fox News show. Sarah Palin (and family) parlayed her failed vice presidential candidacy into realty-television stardom.

The already-famous also have something to gain, even if they miss the Oval Office by a mile. Donald Trump and Carly Fiorina are already famous, but their presidential candidacies raise their public profiles, and could raise interest for their future endeavors. Trump may return to reality television with a new legion of fans among the GOP faithful. Fiorina may be angling for a cabinet position in the next Republican administration.

Others may run out of a desire for redemption, or pure ambition. Maybe former Texas governor Rick Perry wants to be remembered for something besides his famous 2012 “oops” moment. Some, like Sens. Paul Rubio (R-Fla.) and Rand Paul (R-Ky.) may seek to capture lightning in a bottle by imitating the success of Sen. Barack Obama, circa 2008.

There’s one problem. Getting a viable primary campaign off is so prohibitively expensive that almost none of the 15 current GOP candidates could afford to do it on their own. Fortune magazine called it a “$50 million vanity project.” That’s roughly the cost just to launch a primary campaign, and keep it going long enough to have an impact. That’s a grand total of about $750 million for the entire GOP field. This estimate may be too low, given that GOP candidates will have to spend more on media, to make themselves heard in such a crowded field.

So, why are there so many GOP candidates? We have the billionaire GOP sugar daddies of 2016 to thank for that. Since Citizens United opened the door to super PACs, which can collect unlimited donations from individuals and corporations, an influx of new Republican donors and bundlers has driven a money boom on the right.

The mutual benefit is obvious. For candidates, a deep-pocketed supporter can keep them in the race. In 2012, Sheldon Adelson and Foster Freiss singlehandedly kept Newt Gingrich and Rick Santorum in the race longer than they would have been otherwise. The would-be candidate who can’t find a wealthy backer is in danger of being sidelined. Already, Sen. Rand Paul’s campaign appears to be in trouble because he has not attracted a billionaire sugar daddy.Carly Fiorina is already making appeals for donations at her campaign events.

For the right-wing sugar daddies, candidates come cheap, but the long-term payoff can be huge. Newt Gingrich said in an interview that these billionaire donors may support a political candidate for less than they would pay for a yacht.

“What seems like really big money is less than a yacht,” Gingrich said in an interview. Wealthy donors could decide that “this year, instead of buying a new yacht, I’m going to spend $70 million on a candidate,” he said.

The GOP’s sugar daddies are buying influence over lawmakers, according to a study by Martin Gilens, professor of politics at Princeton University, and Benjamin I. Page, professor of decision making at Northwestern University. After examining how politicians handled 1,779 issues, Gilens and Page found that, “… economic elites stand out as quite influential – more so than any other set of actors studied here – in the making of U.S. public policy.” Giles and Page conclude: “In the United States, our findings indicate, the majority does not rule — at least not in the causal sense of actually determining policy outcomes.” Giles and Page echo a 2014 joint Yale/University of California at Berkeley study, which found that campaign donors are more likely than constituents to get meetings with lawmakers.

In the Citizens United decision, Justice Anthony Kennedy wrote that huge political contributions “do not lead to, or create the appearance of, quid pro quo corruption.” Yet, now we live with a new reality, in which billionaire sugar daddies practically have their own primaries, at which presidential hopefuls parade before potential donors, attempting to curry favor with pitches tailored to donors’ political views. 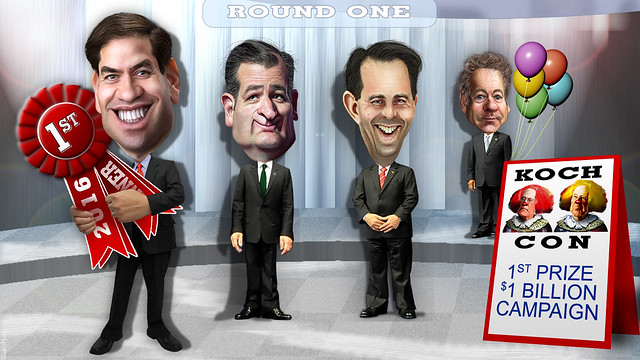 The effect of the “billionaires’ primary” is far less diversity of opinion among the candidates, even in a field as crowded as the GOP’s current field of candidates. On the Democratic side, even with the same realities regarding money, the presence of a candidate like Sen. Bernie Sanders (I-Vt.) has pushed front-runner Hillary Clinton further to the left.

The GOP candidates, however, all seem to be saying the same thing, because they are all appealing to the same set of billionaires who all want the same things: financial deregulation that lets them further pad their bottom line, corporate tax cuts, tax “reforms” that favor the wealthy, and so on. The GOP sugar daddies are willing to spend lots of money to get what they want. Now they can, until they have enough lawmakers in their pockets to get what they’re paying for.