The Backlash Against Discrimination And GOP’s “Indiana” Problem

The powerful grassroots backlash against Indiana’s anti-gay “religious freedom” law is yielding results and inspiring hope. Right-wing supporters of the law were seemingly caught unawares by a grassroots response that’s put them on the defensive.

On Monday, the Georgia House Judiciary Committee canceled a meeting to discuss a “religious freedom” bill similar to Indiana’s. The “Georgia Religious Freedom Restoration Act” passed the state’s Senate earlier this month. Like Indiana’s law, Georgia’s bill would give businesses and private individuals a legal defense for denying services to lesbian, gay, bisexual and transgender people. The bill would undoubtedly pass in Georgia’s state House, where Republicans hold a near 2-to–1 majority, if it ever comes up for a vote.

● A social media campaign against the state launched under the hashtag #boycottindiana.
● At the urging of the grassroots organization Freedom Indiana, the National College Athletics Association (NCAA) condemned the so-called “religious freedom” law, in a statement saying the law creates “concern” for future events in Indiana.
● The Republican CEO of Angie’s List canceled plans to build the company’s headquarters in Indiana — plans that would have generated about $40 million in economic activity.
● In a letter to Indiana’s Republican governor Mike Pence, the CEOs of nine different companies headquartered in Indiana expressed concern that the law would lead to discrimination against their employees.
● Other major companies have condemned Indiana’s law, and similar laws in other states, including Walmart, Yelp, Salesforce, Eli Lily, The Gap, Levi Strauss, Twitter, and Anthem.
● In a Washington Post op-ed, Apple CEO Tim Cook opposed the legislation on behalf of Apple.
● The Democratic governors of Connecticut and Washington state announced bans on state-funded travel to Indiana. The mayors of Seattle, San Francisco and Washington, D.C. announced similar bans. 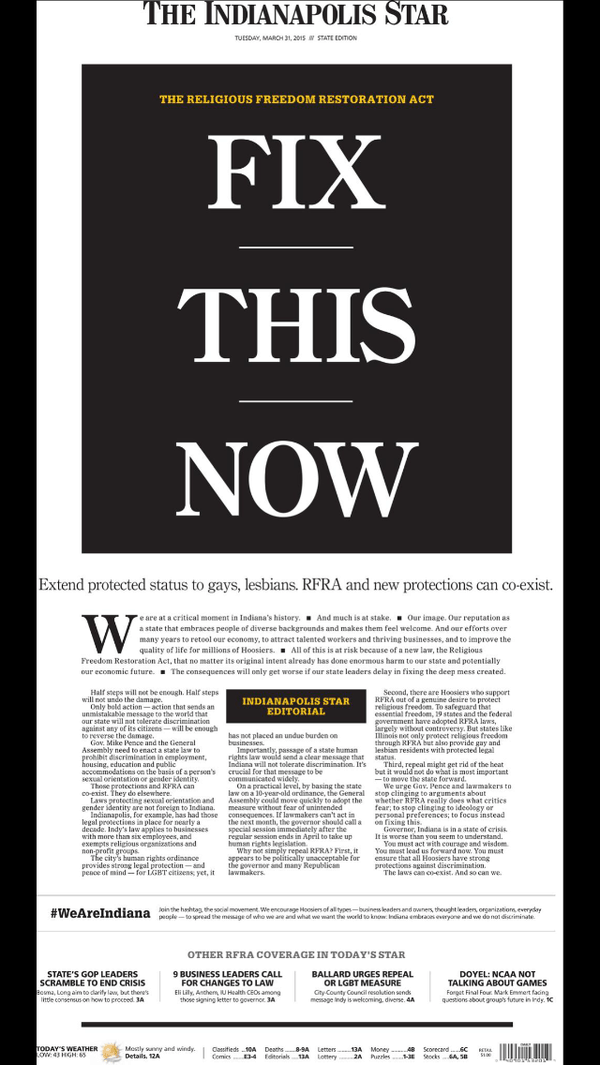 Georgia is not alone. While Arkansas lawmakers moved forward with their own bill, North Carolina’s Republican governor Pat McCrory said he would not sign a “religious freedom” bill passed in his state. Montana’s “religious freedom” bill was narrowly defeated in the state House after Gov. Steve Bullock (D) noted the backlash against Indiana’s law, and said Montana didn’t need a similar measure.

(Update: Arkansas governor Asa Hutchison has refused to sign the bill that sits on his desk. He has called on the legislature to make changes before sending it back to him. Hutchison's decision marks a serious shift, as he had previously pledged to sign the bill.)

This week Mike Pence came to embody what might henceforth be known as the GOP’s “Indiana problem.” Once a symbol of the GOP’s “deep bench” and one of its top presidential contenders for 2016, Pence’s conservative credentials — and the religious right’s continued influence over the GOP — demanded that he defend Indiana’s anti-gay “religious freedom” law. Likewise, GOP presidential hopefuls rushed to defend Indiana’s law, seeking to motivate Christian conservatives to back them in the primaries.

The problem is that Republicans have to be either dishonest or deluded to back “religious freedom” laws, only to end up tripping over the truth or running headlong into reality. Pence signed the “religious freedom” bill into law in a ceremony that was closed to the press and the public. Pence later tweeted a photograph from the signing, but refused to name the lobbyists who attended.

I signed SEA 101 today to ensure religious liberty is fully protected under IN law http://t.co/vCOASZBZnH pic.twitter.com/CMFJh6aLDx

That’s probably because, though he claimed the law was not about anti-LGBT discrimination, Pence was flanked by some of Indiana’s most prominent anti-gay activists when he signed it.

Those same anti-gay activists oppose any attempt to “clarify” that Indiana’s law does not legalize discrimination. Conservatives are already blasting Pence for “caving” by calling for such clarifications, because they know that it could potentially destroy the bill by exposing one dishonest defense of it. Pence and other supporters falsely claim that the law simply mirrors the federal Religious Freedom Restoration Act and those in other states, while ignoring some important differences that are so obvious even a Fox News anchor can spot them.

Meanwhile, spending so much time and energy passing and defending such laws creates problems for Republicans, now and in the future. Indianapolis’ Republican mayor Greg Ballard just signed an executive order reaffirming that groups doing business with the city must abide by its human rights ordinance, which prohibits anti-LGBT discrimination. Backers of the religious freedom law are “missing the bigger trend,” Ballard says.

However, a closer look reveals the “bigger trend.” Among Americans ages 30 to 49, 50 percent believe that “religious freedom” shouldn’t be a license to discriminate, compared to 46 percent who believe otherwise. Among Americans ages 13 to 29, 62 percent oppose such discrimination. A recent poll by the Public Religion Research Institute shows that 80 percent of millennials believe that LGBT Americans deserve to have laws protecting them against discrimination.

It wasn't always like this. Of all the old "culture war" battles, LGBT equality is the one where progressive activists have "flipped the script." Opposition to equality is the new "third rail," and politicians who touch it are in for a shock. That happened, in large part, because LGBT activists and allies organized against such laws, and humanized the issue so that people increasingly see these laws as a direct attack on their family, friends, neighbors and co-workers.

There are other issues — among them immigration, Social Security, unemployment, workers' rights — on which politicians feel they can act against human decency and fairness without consequence, and conservatives work hard to dehumanize the poor and vulnerable. The lesson here for Democrats is to humanize these issues, and wear down conservative efforts to turn such people as low-income Americans, public workers and undocumented residents into "those people," until a majority of Americans see "those people" as their family, friends and neighbors — and reject conservative policies that harm them.

In 2016 and beyond, Republicans will find it hard to strike a balance between “religious freedom” and discrimination. They will find it even harder to choose between either “caving” and alienating their base, or alienating the growing majority of voters and facing a grassroots onslaught.